Walden’s Ridge, TN —   The  Walden’s Ridge Community came together to honor Veterans with quilts on honor of Veteran’s Day last week.  50 quilts were made for veterans by the Walden’s Ridge Quilting Club.   Such a wonderful gesture by the Community to show appreciation to those who gave so much. 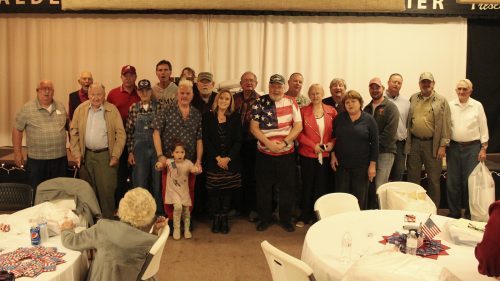 I walked in the door of the Walden’s Ridge Community Center Thursday November 9, 2017, and I could not believe how many families and veterans were inside. I stood there with my 4 year old daughters and was humbled. My family has many veterans. But the one who stands out in my mind is my grandfather. He has always been a quiet man, but my Maw Maw told me about when he joined the air Force he only had a 8th grade education and while in service got his GED. He was stationed in Okinawa, Japan during the Korean War. He never saw the front lines, but he did tell me he did not want to raise a family while in service, so when he laid eyes on my grandmother at a USO dance he knew that his tour of duty was coming to an end. They were married one year later in a small church on their way from Alabama to North Carolina because my Maw Maw was not going to stay the night with him if they were not married. This would have been 1956. My Paw Paw would later work for Duke Power and rise up from washing toilets to being a manager of the Mechanics and Laborers.

My Paw Paw always told me “Love God, Love Family, Love your Country.”  When I was growing up I spent every Saturday cleaning, gardening, and cooking with my Paw Paw and we would talk about everything under the sun, but what I remember most was the day he raised his USA Flag (he called it the Colors). He stood there proud. I remember the moment of silence we took, and remember how precise he was in the raising of the colors.
My Paw Paw is 84 years old, and cannot remember many things; he remembers the colors and stands when the National Anthem is played. I have two things I am proud of that are at my store in Dayton, one is the Christmas trees my Maw Maw that she gave me and My Colors that hangs above my event room.

So, when I walked into the WRCC all I could see was my Paw Paw standing before his colors.. He would be so proud of what the quilting club does for our veterans. I had the amazing privilege of talking with Purple Heart recipient who still has shrapnel metal in his body from a mortar round(Ron Phillips).  Also talked with 98 year old WW2 Veteran who stated with pride his willingness to serve in the Army, and even a young man who will end his tour of duty on my Paw Paws birthday Nov. 17 2017.   He stated that he was proud to serve, and that one of his heroes is the veterans. I cannot tell you or describe the looks on the faces of the quilt recipients, but know this every pattern fit the individual, and every stitch helped heal.

I am humbled and honored to have covered the Second Annual Veterans Dinner.   May God Bless each man and woman who put their heart and soul into the 50 quilts that were made and donated by the Walden’s Ridge Quilting and Craft Club. This group does not stop with just quilts they also make quilts, pillow case, children’s hospital gowns, and fidget quilts for local hospitals, nursing homes, Ronald MacDonald House, and any one in need. This astounding group of individuals have been making since 2012 and will continue their humbling work for years to come. For more information call: Lyn Summers at 423-775-1083.

I would like to also send a shout out to the Rhea High School ROTC and their commanding Officer. Cadet Ist LT. Wooden, Cadet Captain Rose, Cadet 1st SGT Bumpass, Cadet SGT. 1ST Class Valdez, and SGT 1st Class Harris (Retired). These young men and women presented the colors and gave us all hope for the youth of today in their respect for the veterans and our country. SGT 1st Class Harris was also a quilt recipient from a cadets mother. He said that ” his heroes are his father and veterans.”