A new study by the U.S. Travel Association reports, in 2015 Rhea County households saved more than $334 in state and local taxes due to the economic impact of tourism.

According to the study, Rhea County taxpayers saved over $2.21 million in local taxes and $1.91 million in state taxes as a direct result of tourism. 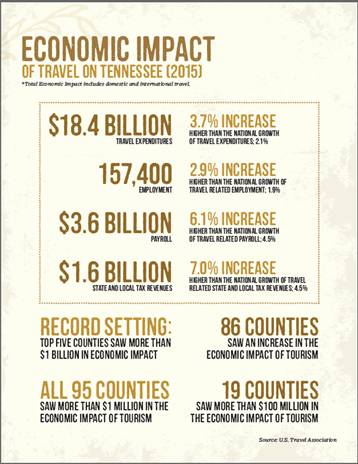 “It’s one of the top industries in the state,” says Cindy Dupree the chief spokesperson for tourism in Tennessee.

“Our visionary partners in small towns and rural counties are making a difference at the local level which contributes greatly to the success of tourism statewide.”

Rhea County’s Director of Economic Development and Tourism, Dennis Tumlin said, “It’s a good feeling to know we helped families save $179 in local taxes alone in 2015.”

“Our return on investment is off the charts,” reported Tumlin.

In 2013, the state office of tourism launched a new tourism branding campaign “The Soundtrack of America – Made in Tennessee.”  This year, an independent research company found the campaign has generated 18 dollars for every one dollar spent.  That’s twice the national average.

“The success of tourism in Tennessee is impacting all Tennesseans.  The state and local sales tax revenues are making a significant impact on our bottom-line,” notes Dupree.

“In Rhea County, the tangible impact is $334.76 for every household,” and that’s significant states Dupree.