GATLINBURG, Tenn.  — The Tennessee Fish and Wildlife Commission heard details of a plan for a major education campaign about chronic wasting disease (CWD) at this week’s meeting that concluded Wednesday in Gatlinburg.

CWD is fatal in whitetail deer, mule deer, elk and moose. It is classified as a transmissible spongiform encephalopathy (TSE); a slow degenerative disease of the central nervous system that literally eats holes in the victims’ brains. In time, animals that contract the disease become emaciated, behave abnormally and salivate profusely. Once these symptoms appear, most animals die within a couple of months. Prions, which are mutant, self-propagating versions of proteins that occur normally in the body, are the disease-causing agent. They are essentially indestructible and can lie dormant in the environment for years and still be infective.

The disease has long been discussed in Tennessee. It was even the reason TWRA was forced to halt importation of elk from Canada, slowing elk restoration efforts in the early 2000’s. There has never been a case of CWD documented in the State of Tennessee. However the list of other states – 24 at last count – where CWD has been detected continues to grow. Biologists say Tennessee is the verge of becoming “an island” surrounded by CWD states.

TWRA Communications Director Doug Markham outlined details of the upcoming campaign for commissioners this week. He reported that deer and deer hunting have a $46 million impact on Tennessee’s economy. They are desperate to keep the disease out of the Volunteer State and are in the early phases of a major statewide education campaign. The key marketing line will be, “Help Keep Tennessee CWD Free.”

Calling CWD one of “the greatest threats” in Tennessee, Markham said, “We’ve got some really good people and really good tools to hopefully help folks not bring CWD back to Tennessee because we know it’s going to be a really bad thing if it gets back here.”

By “not bring CWD back to Tennessee,” Markham is referring primarily to hunters. Every year thousands of deer and elk hunters travel to other states across the country. Many of those states have had documented cases of CWD. If a hunter kills a deer, elk or moose from a CWD positive area (see map, click to enlarge), it must be properly processed before bringing it back into Tennessee. Properly processed means:
– All meat must have been totally removed from the bone
– Antlers can only be imported if they are attached to a clean skull or skull plate with all meat removed
– Cleaned teeth (with all tissue removed)
– Completely finished taxidermy and antler products (tanned hides)

Arkansas Game & Fish created a special video to instruct hunters on how to properly skin and debone a deer:

Violate any of those rules and you’re subject to prosecution, and confiscation of your animal. TWRA enforcement officers prosecuted several violations of the importation rules last season.

Markham said everyone in Tennessee should expect to see education efforts on social media, in the news and in print. He said they will also be working with meat processors and taxidermists to insure compliance with the rules.

TWRA Commissioner Jeff Cook, M.D. said he believed the public education effort needs to be emotional, with a little bit of fear factor built in. Another commissioner suggested a TV commercial using a child crying over a sick deer – reminiscent of the highly successful litter campaign that used an American Indian crying over roadside trash.

“We need to emphasize how virulent the disease is,” said Cook. “Once [CWD] is in the environment you can’t get rid of it. It does nothing but continue to grow.”

Commissioner Tony Sanders from Chattanooga pointed out that he is “very social media aware” and said he hasn’t seen the public education efforts TWRA has mounted so far.

“My concern is that there are a lot of hunters who don’t use social media,” said Sanders. “That’s something I don’t want us to lose sight of.”

Markham responded, saying, “We’ll try everything we can to try and get the message out there.”

More information on CWD  on this TWRA web page.

Commissioners also heard an annual report on the opening of dove season in Tennessee.  In recent years biologists have been compiling and publishing data of opening day dove harvests from TWRA’s wildlife management areas and public leased fields. 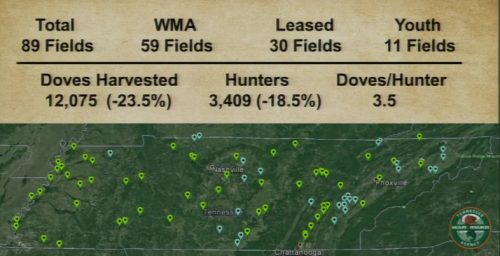 Asst. Wildlife Chief Chuck Yoest reported that the harvest was down statewide from the previous year by more than 23 percent (other info graphics below). He said they attributed the reduced harvest due to bad weather as the remnants of Hurricane Harvey were passing through West Tennessee on the opening day of dove season.

The TFWC also passed the 2018-19 sport fish and commercial fishing regulations at this weeks’ meeting. However the majority of changes were mostly housekeeping measures or issues without widespread impact. 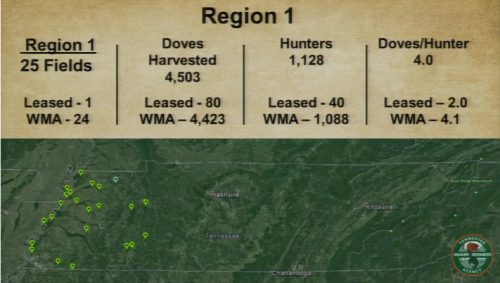 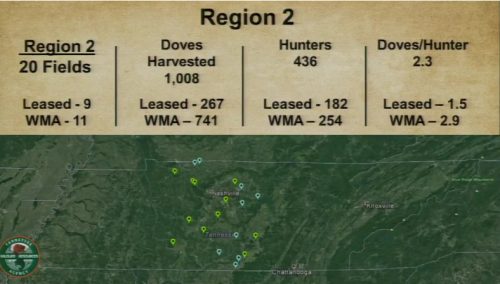 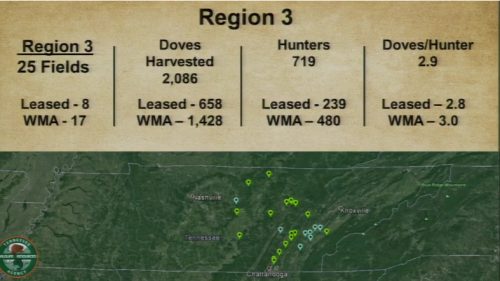 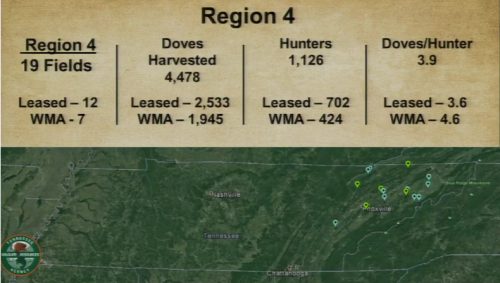