Step into Matt Monahan’s St. Elmo home and you will be greeted by two things — a house full of playful, yet well-mannered children, and walls covered with artwork.

The works of art are all of Monahan’s making, in a rare but beautiful artform. It is called Gyotaku, pronounced with a hard “G” (gee-o-TAH-ku). The first part, “gyo” stands for fish; the second part, “taku” means rubbing. 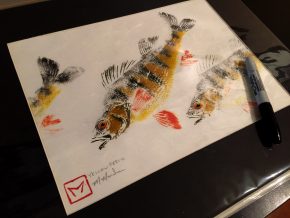 Monahan said it began in the mid-1800’s when Japanese fishermen began rubbing rice paper on inked fish to prove the size of their catch. Today it is a global artform, however very few in our area practice it. Monahan said most U.S. gyotaku artists are on the West Coast, Hawaii and in Florida, but he knows of only one other in Tennessee.

Monahan’s real job is as an educator at Chattanooga Christian School. He is also an avid fisherman, so passionate about fishing that he developed a special Interim class and curriculum for CCS youngsters. During the special class the kids learn all about fishing from various volunteer instructors, and then get the chance to actually hit the water with the volunteers to catch their own fish.

Afterwards, Monahan helps the youngsters create their own gyotaku artwork with the fish they caught (in addition to hosting a school fish fry).

With five kids of his own at home, Monahan said he doesn’t get the chance to fish as much as he’d like, so gyotaku helps fill the void.

“My kids aren’t old enough that they want to go pound the water for four hours at a time,” he said. “But this is something I can do at home after they go to bed.” 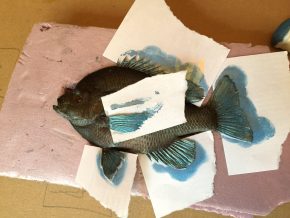 While Monahan is simply creating a replica print of a real fish, watching him meticulously prepare the fish, delicately apply oil-based paint in just the right color combination and then gently paint the perfect “eyeball,” it’s easy to see “the art” in this rare form of artistry.

Like most teachers, Monahan often works a second job during the summer break. He is already selling many of his gyotaku prints, but his goal is for the art to become his new “second job.”

“If this could move from a hobby that pays for itself, to a hobby that replaces even some of my manual labor in the summer, that would be wonderful,” he said.

He already has a selling website but he is working on a more personalized website of his own.

“Once that’s in place I hope to be a little more energetic about my marketing,” he said.

Monahan’s moniker is “The Might Bluegill,” his favorite fish.

Watching and listening to this artist at work, it is easy to see, and hear, his passion. He said since he was a child he would catch a fish and then just sit and stare at it.

“I do think fish are one of the most beautiful things on this planet. The pearlescent colors that look almost three dimensional, and their eyes … sometimes it can just look like a universe unto itself.”

In spite of their beauty, and his desire to re-create their likeness, Monahan admits that he is doomed to failure.

“I have accepted the fact that every attempt to print a fish will fail to capture the full beauty of the actual fish.”

Rest assured however, it will not keep him from trying.