NASHVILLE, Tenn. – Most fishermen just call it “grass.” Others refer to it as “milfoil” (although that is just one species of many). Scientific types called it “aquatic vegetation,” while most dock owners refer to it as “weeds” (or other names we can’t publish here).

Whatever you call it, the submergent (underwater) aquatic vegetation growing on area lakes has been the subject of never-ending controversy since it first appeared in the late 1970’s. There have been boon & bust cycles for the aquatic vegetation since then for a variety of reasons. But currently Chickamauga and Watts Bar lakes seem to be in a boon cycle.

Fisheries biologists and fishermen love it. They insist it provides greatly enhanced habitat for fish and is one of several factors that has led to Chickamauga being named one of the best bass fishing lakes in the nation. Meanwhile lakeshore land and dock owners despise it. Many say they are forced to pay thousands of dollars to private companies to keep their docks clear of vegetation, otherwise they would be useless.

You can bet, however, whenever those boats appear spraying herbicides in the water the fishermen who witness it are going to raise all manner of “heck.” The spraying is all perfectly legal provided landowners obtain proper permits.

“I feel like I’ve grabbed hold of a tar baby. I’ve got constituents on both sides of the issue,” said Senator Mike Bell (R, District 9 including Bradley, McMinn, Meigs, Monroe and Polk Counties).

Sen. Bell has established a group called the “Aquatic Spraying Study Committee,” a sub-committee of the Energy, Agriculture and Natural Resources Committee. He recently held a senate hearing with testimony from a variety of interested parties.

“I’ve heard from a number of constituents on this issue” said Sen. Bell. “Property owners see the aquatic vegetation as a nuisance. I’ve heard fishermen say I don’t want a single drop of herbicide in the water.”

Sen. Bell is listening to both sides but openly admits he hears a lot from the fishing side. He is an avid hunter and fisherman himself. And his son fished on the national championship bass team for Bryan College.

Sen. Bell says his goal is to draft legislation for the upcoming session to better manage the aquatic spraying.

“I’m going to draft something,” said Sen. Bell. “What’s going on in the water right now is the equivalent of me spraying Roundup in a state park.”

Sen. Bell understands there is a strict permitting process for applying aquatic herbicides, governed by the Tennessee Dept. of Environment & Conservation. He feels, however, there are not enough guidelines to identify clear boundaries that commercial sprayers must adhere to. He is also concerned that there is not enough transparency in the morass of bureaucracy and red tape involved in the permitting process.

During the recent hearing Sen. Bell and others listened to testimony from a number of interested parties including:

You can watch the entire two hours of testimony here.

“If it were twenty or thirty percent coverage I would say, ‘Great,” he told senators. “But that’s not what happens. It turns into a shag carpet.”

Goldsby said outside of Florida, his is one of the largest aquatic control businesses in the Southeast. He and his employees are licensed and certified by the Tennessee Dept. of Agriculture.

He testified that aquatic herbicides have absolutely no affect on humans. Goldsby said he is well-aware that fishermen often complain that his company applies herbicides to huge expanses of the lake but insists that is never the case.

He said the permits many landowners receive do allow up to a maximum treatment of 80 acres. But he said, “Nobody is going to treat 80 acres. The product (spray) cost for that on the low end would cost in the vicinity of $200,000. In general our applications are a half-acre.”

Butler testified that there shouldn’t be a desire to eliminate aquatic vegetation spraying.

“We have to keep all the tools in the toolbox,” he said.

However he said there needs to be more disclosure and transparency in the permitting and spraying process.

“We really don’t know what is going on in the reservoir,” he said. “We have responsible applicators and there’s nothing illegal about that. But what if you have sixty of those?”

“It’s our understanding that [the companies] have to keep the records but they don’t have to turn them in,” said Butler. “When we don’t have that kind of information it is really hard to develop public policies. We need folks like Aqua Services. They are important to the management solution. Our concern is that we don’t know enough about what is going on.”

Frank Fiss, Chief of Fisheries for the Tennessee Wildlife Resources Agency and Bucky Edmondson, Director of TVA Natural Resources, confirmed some basic information senators already knew. Fiss said it was their belief that aquatic vegetation in general is beneficial for fisheries management.

Last year Strader was on the lake and saw boats spraying herbicide. He went live on Facebook and his resulting video went viral, creating a firestorm of controversy among fishermen. After being contacted by the applicator Strader posted a follow-up video retracting or clarifying some of the information he posted initially.

Strader began his testimony saying he has been a professional fisherman for 21 years and that, “I’m a lot better talking in front of fishermen than I am senators and stuff.”

Strader countered Joseph’s testimony about there being overly dense mats of vegetation on local lakes.

“Chickamauga and Watts Bar lakes have an annual drawdown (lowering of the water levels) which kills the grass every year,” he said.

He believes that the most productive “littoral” (shallow water) zones are replenished every year. He also told senators he is “scared of any chemical in drinking water” and would like to see that question studied more.

“I have caught thousands and thousands of bass in heavy vegetative mats,” said Strader, who has won more than $2 million dollars in bass tournaments. “My education may not be as embellished on paper as others but I’ve slept, lived and breathed with the wildlife on the Tennessee River. This was my training grounds. I have over two million reasons why I know what I’m talking about.”

Tumlin was one of the government leaders who spearheaded the FishDayton.com marketing effort in Rhea County, a county that had the highest unemployment rate in the state.

“Our tourism is driven by Lake Chickamauga,” he told senators. “It’s bass fishermen. It’s a niche market and we’re going specifically after the tournament bass fishermen.”

He says since they began the effort in 2014 to promote Dayton as “#BassTown,” they have hosted 150 bass tournaments on Chickamauga Lake. He says the effort has generated a wealth of new business, jobs and millions in additional sales and hotel tax dollars for the economically depressed area. 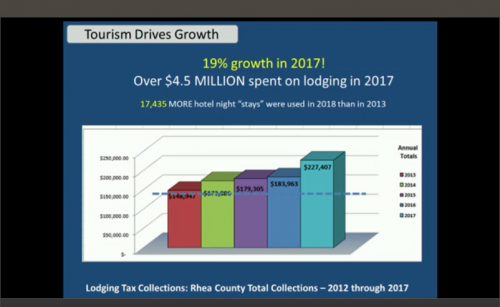 A few days later, following the formal hearing Sen. Bell remained insistent that he will be drafting a bill to address the aquatic spraying issue.

He says he intends to draft the bill so that Tennessee Wildlife Resources Agency officers are the enforcing authority. He knows he must walk a fine line because lakeshore landowners, also his constituents, deserve to have their needs addressed as well.

“It’s going to be a chore threading that needle,” he admits. “But yes, I want to have something drafted by January. No question.”