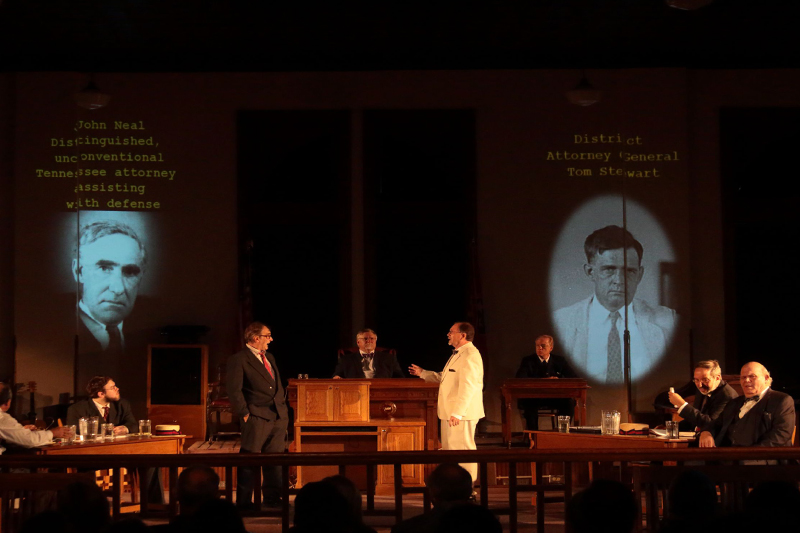 On that hot sweltering day in July of 1925, Judge John T. Raulston banged his gavel bringing to close one the most famous court trials ever held. As local town’s people, farmers, and out of town visitors began departing the Rhea County courthouse, they realized that they had just been witnesses to a trial like no other.

Well, let’s fast forward 91 years to this week and you too will be able to sit in the actual spectator chairs, in the actual courtroom, and witness a reenactment of that famous trial. The “Front Page News”, presented by a partnership between the Cumberland County Playhouse and the Scopes Trial Festival in Dayton, TN,  is a play with music by Jim Crabtree and Bobby Taylor based on a script by Deborah Harbin.

It is made possible by the support of the Rhea County Commission, the City of Dayton, and the Tennessee Arts Commission. According to Tom Davis, the Festival Chairman, the three year partnership with the playhouse has raised the artistic bar while remaining faithful to the facts of the case.

With the addition of music, lighting effects, and projecting images on the courtroom walls, it has helped audiences come closer to experiencing the humor, drama, and intensity of the Scopes Trial.

Myths surround the trial exist primarily because the play and movie versions of “Inherit the Wind” have skewed the world’s view about what really happened in Dayton during that hot summer of 1925.

There have been numerous attempts to set the record straight throughout the years. The first fact based play,  “The Scopes Trial: Destiny in Dayton”, was produced in 1988. The following year, the festival was added to create the carnival like atmosphere that surrounded the trial. In 1998, the festival produced “The Scopes Trial: Monkey in the Middle” by Dayton playwright Gale Johnson. This production ran for 10 years. Up next was “One Hot Summer” written by Curtis Lipps of Dayton. Then in 2012, the festival committee commissioned Deborah Harbin to write “Front Page News”.

This historically accurate play is presented in the famous courtroom where Clarence Darrow and William Jennings Bryan battled in 1925.  There are three performances of “Front Page News” remaining in this years festival and we hope to see you there for this great opportunity to learn about this historical trial.

Admission tickets required and will be available at the door prior to each performance.