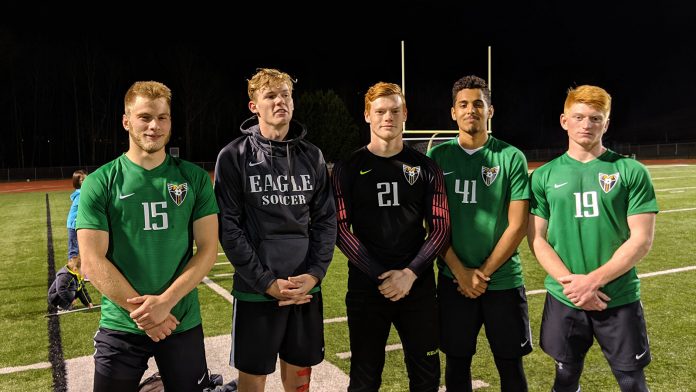 Evensville, TN —  Rhea County High School won 5-2 in their opening season home game against Cookeville.  The Eagles used three early goals(within first four minutes) to generate a lead they would not relinguish on the way to a big win against district rival.  The first three goals began with a goal only 20 seconds into the game.  Saul Chacon scored the first goal seconds into the game.  The next two goals were by Brady Rice within the first four minutes.

Rhea County’s offensive spurt was over and though they were playing hard, The Eagles scored one more goal before halftime when Justin Price bounced one off the goal keep after beating two deenders.  Cookeville scored one goal in half to trail 4-1.

Second half was a battle that sometimes got a bit chippy.  Several yellow cards were awarded to Cookeville.  The chippy play was highlighted when two Cookeville players rushed the net to retrieve a scored ball simultaneously with Rhea County goal keep Payne Morgan.  A bit of a tussle ensued and play was stopped for a short while to sort out the situation and an injury to one of the Cookeville players.

On the road the Eagles won 5-0 over White County on March 21st.  In the game Brady Rice, Saul Chacon, Nate Varner and Zac Barnett scored goals.  With assists were Carson Ruehling(2 assists), Kennedy hernandez, Carter White and Ben Doonis.  Payne Morgan had another good day in net with five saves.

The Eagles then played three games in Cleveland Classic.

On March 22nd, they played to 0-0 tie against Walker Valley and Payne Morgan had the only stat of the day, with two saves.

On Saturday, March 23rd they played McMinn County and won 4-1.  In the game Cooper Ruehling scored a goal and assisted.  Carter White socred a goal and Carson Ruehling added two goals.  Brady Rice, Justin Price, and George Santiago each added one assist.  Payne Morgan had seven days on the day.

In their last game on Saturday, Eagles battled for a 3-2 win over Cleveland.  Chris Zwinkel, Carter White and Mehrab Parmar each scored one goal.  Carter White and Brady Rice each had one assist and Payne Morgan added seven saves.

After the Cookeville game, Rhea County coach Justin Smith said, “I was worried after this being our first game.  Cookeville had played two games last week, and I was afraid they would have the upper hand.  Clearly i was wrong about that.  The boys came out working their tails off.  Told the boys not to let off.  Game ended 5-2 and I don’t think you could have asked for better results.”