Members of the Rhea County Fire Department said goodbye today to one of their own. Rhea Counties Assistant Fire Chief Chuck Kinney passed away on September 7, 2017.

Born on March 31, 1950 in Binghamton N.Y. Chuck lived in Nichols, NY for many years before moving to Dayton, in 1986. He served his country in the US Air Force during the Vietnam War. 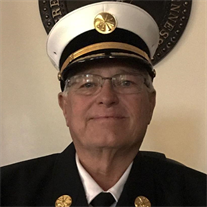 He was the Assistant Chief for the Rhea County Fire Department where he was also the Fire Investigator. Chuck was a member of Corvin Road Baptist Church, a member of the International Association of Arson Investigators, the Masonic Lodge 512 F&AM, the American Legion Post 100, and was an avid fisherman.

Funeral services for Chuck were held today at 12:00 noon in the Chapel of Vanderwall Funeral Home with pastor Rev. Steve James officiating.

A funeral escort of more than three dozen Fire Apparatus escorted the procession along Hwy 27 to Rhea Memory Gardens where he was laid to rest.

The family has asked that any memorial contributions be made to Rhea County Fire Department Association or Gideons International.