After years of grassroots’ efforts, the Rhea County Republican Party looks to celebrate victories reaching all the way to the White House at their annual Reagan Day Dinner to be held this Saturday.

“I’m very excited for the party with the recent election. I look for a lot of good things to happen,” says newly elected party chair Keith Flatness.

But he’s most excited to announce Randy Boyd as this year’s Keynote Speaker for the  Reagan Day Dinner adding, “We’re gonna have an exciting night, it should be a lot fun.”

Randy Boyd is a successful entrepreneur who quickly turned rock star as head of the state’s economic and community development efforts (TN ECD).  In the two years he headed the department, Boyd and his team guided 50,000 jobs and $11 billion in capital investments to Tennessee.

“I’ve spent a lot of time in Rhea County,” admits Boyd.   “I have a passion and energy for it’s future.  There’s a lot of energy, and  I’m very excited for Dayton and Rhea County.”

State Representative Ron Travis says, “Randy is such a passionate man when it comes to serving the state of Tennessee.  He holds nothing back.  His vision is unbelievable.  He’s just got a good heart and it shows.”

And Boyd remains committed to all Tennesseans.

“While this is the best time for the state of Tennessee, not everybody is sharing in our success,” said Boyd.   “We want to have zero distressed counties in our state. We’re only as rich as our poorest neighbors.”

“Many of our rural counties are struggling, but I believe we’re at the precipice of a rural renaissance, and Rhea County will be leading the way.  Not only does it have a great work force but great leadership as well,” insisted Boyd.

Boyd heads Radio Systems Corp., which he created, develops area real estate and also owns the Tennessee Smokies AA baseball team.  He also chairs tnAchieves, the partner organization to Tennessee Promise.  He stepped down from his role at TNECD, and is now considering a run to succeed Haslam in 2018.

“Leaving the department (TNECD) was one of the toughest things I’ve ever had to do, but it was time for me to move on to another chapter,” admits Boyd.  “I want to make sure the great momentum continues for our state.” 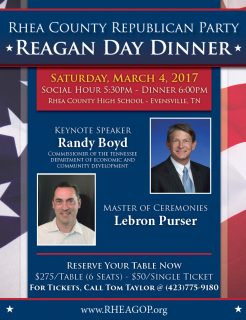 Party leaders encourage you to reserve your table and/or buy tickets while they are still available ($275/table – 6 seats, $50 per ticket).

Attendees can expect a steak dinner, music, and what has become an event in itself the annual Reagan Day Auction.