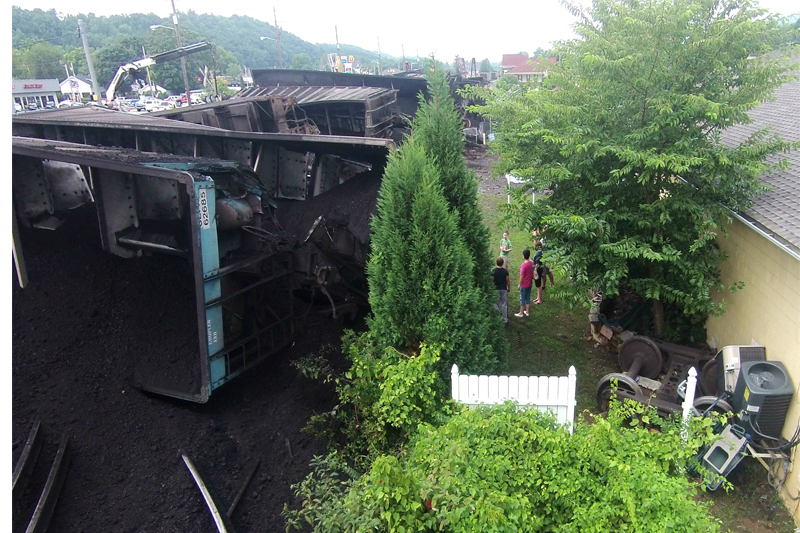 Upon the arrival of emergency workers, they confirmed to the dispatcher that there had, in fact, been a train derailment. Emergency responders from various departments which included Police, Fire, and EMS had raced to the scene.

It was quickly learned from railroad officials that the train carried no hazardous materials. With three engines, the northbound Norfolk Southern train was pulling 122 cars containing only coal.

At some point as the train was passing near the Spring City Depot Station, it began to derail ultimately causing 41 cars to leave the track and spill the massive amounts of coal it was caring. Each train car is estimated to carry anywhere from 100 to 125 tons of coal.

Witnesses at the nearby Rocky Top reported they heard a sound like a cannon. When they looked in the direction of the noise, they had observed sparks coming out from under the northbound train.

One by one, coal cars begin crashing into one another like an accordion, piling up all down the track. First responder’s top priority was to ensure that there were no injuries or any present danger to civilians or emergency workers.

Railroad officials began arriving immediately, preparing for the task ahead of cleaning up the massive piles of coal and twisted metal from the train. By morning a substantial amount of railroad officials and heavy equipment had arrived on the scene.

Rhea County Executive George Thacker, in an interview, stated that the Whistle Stop Inn, which is located on the north end of Front Street just adjacent to the railroad tracks, had suffered damage to their buildings, and to their central heat/air units caused by wheels from one of the train cars. The damage accompanied by a gas leak caused officials to evacuate the seven persons who were staying at the Inn.

Thacker stated that the American Red Cross was notified and assisted in getting shelter for the evacuees. They were taken to the Best Western Hotel in Dayton, TN due to the fact that the nearby Howard Johnson had no vacancies.

Thacker stated that in a joint effort between railroad officials and emergency services workers, everything went smooth as clockwork during the night. He also would like to say special thank you to the McDonald’s restaurant which is located in the Rocky Top convenience store for staying open all night and serving all of the emergency workers that were on the scene.

Thacker also had thanks to the Volunteer Electric Cooperative for quickly restoring power to a few area homes and businesses that were affected by the derailment.

An exact cause of the accident is unknown at this time according to Thacker. He states that railroad officials are conducting an investigation simultaneously to cleaning up of the site.

Spring City Commission member Judy Bauer echoed Thacker’s  sentiments, in thanking everyone for the quick response and hard work given to the city in this time of need.