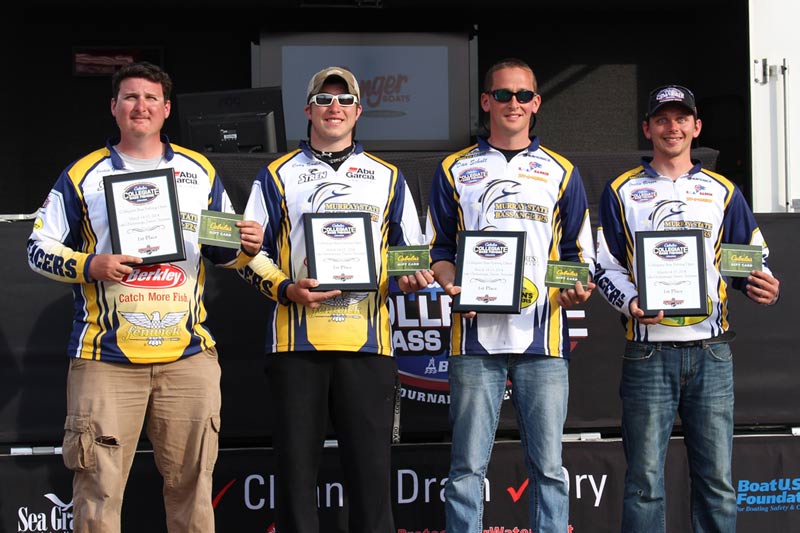 Dayton, TN — The Cabela’s Collegiate Bass Fishing Open marked the first nationally televised event of the 2014 season for Lake Chickamauga in Dayton, TN.  The event is the first of a three part series which will be televised on NBC Sports Outdoors, Pursuit Channel, and other networks.

Over 220 anglers representing more than 40 colleges converged in Rhea County to compete for the title.  During the two-day event, student anglers landed 457 Lake Chickamauga bass weighing a combined 1,566.7 lbs.  Every fish was safely released back into the mighty Chickamauga.

This year’s event encouraged teams to share information between boats by combining weights of the top two boats.  The winning Murray State team took full advantage of this format.  The team experimented with different setups until they found what the fish were hitting.

After Day One, Bethel University (29.26 lbs) held a slight lead over Murray State (29.69 lbs), the eventual winner of the event.  Murray State’s Dan Schult says of the Bethel Bass Fishing team, “They just always seemed to have an edge on us.  They are a great team, always competing at the top.  We are always kidding with the Bethel team about who’s gonna win.  We have a friendly rivalry with them.  After Day one of the tournament, we were only 4 oz behind them.”

Murray State turned in another solid performance on Day two (20.43 lbs) making them the only team with 20+ lbs each day.  Schult speaks to their Day two success, “We put together a strong pattern shallow.  Everybody else was fishing deep.  The shallow water paid off as the deep water fish dried-up.  The main key to our success was finding areas with limited pressure.  We found some secluded areas that we had to ourselves.”

Dan Schult a senior at Murray State and Ag Business major adds, “There are so many great teams, you can’t count anyone out.”  Shult also says, “He had a blast on Lake Chickamauga, and will definitely be back.”

The winning 2-day total weight was just under fifty pounds, 49.69 lbs.  Auburn University rounded out the top 3 while the University of Tennessee secured a 9th place finish.