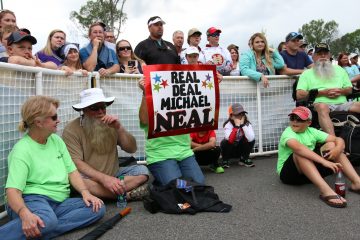 EAST RIDGE, Tenn. — In spite of catching more than 65 pounds of bass in three days, and winning nearly $20,000, Michael Neal from Dayton, Tenn., was feeling a little bit like a bridesmaid Saturday. Competing in the 3-day Bassmaster Southern Open on Chickamauga Lake, Neal came in second place to John Cox, again.

“I’ve lost two big tournaments to him, both in a calendar year,” said Neal following the final weigh-in at the East Ridge Bass Pro Outpost.

Cox, of course, was on Cloud Nine Saturday when the scales revealed his final 3-day weight as 68 pounds, 3 ounces. He collected more than $53,000 in cash and prizes, plus an invitation to the famous Bassmaster Classic, often known as “The Superbowl of bass fishing.”

“I can’t believe I’m going to the Bassmaster Classic,” Cox said. “I don’t even know what to say… I’m shaking.”

Cox was one of the few anglers who exclusively sight-fished for shallow water spawning bass throughout the tournament.

However Chickamauga bass are in transition right now, meaning some are still spawning while others have already spawned and moved offshore in deeper water. Neal is an offshore, ledge-fishing specialist.

“I was fishing out. I was letting the fish come to me,” he said.

Neal admitted that one bad decision on Friday may have cost him the win. He caught several good fish in one area, culling some smaller fish, but chose to move on.

“If I had yesterday to do over again I’d have spent more time in that one section of the lake instead of trying to run the whole thing,” he said. “Just one decision, one decision.”

He admitted that the added pressure of being on his home lake might have influenced that decision.

“It might have affected me a little bit in the fact I had more places to go to,” he said. “If I knew what I had in some strange lake I might have settled down in that one area. But when you’ve got 25 places you want to hit in a day, you’ve kind of got ants in your pants and run around a little bit too much sometimes.”

But being the hometown boy had its advantage as a large contingency of family and friends was among the Saturday weigh-in crowd to cheer him on.

“It was awesome. Family, friends, and people I didn’t even know came out,” said Neal.

Neal went into Saturday, the final day of competition, in 4th place, more than seven pounds behind Cox. Neal caught the heaviest bag of fish on Saturday (24-6), but it wasn’t quite enough to make up the deficit.

Josh Jackson of Cobden, Ill., was the top co-angler in the second Southern Open of the season. He caught a three-bass limit each day of the tournament and finished with a three-day total weight of 32-9. Jackson won a Triton 179 TrX and Mercury 115 ELPTR Four Stroke boat/motor package with the victory.

Neal isn’t waiting around to catch his breath. He left the weigh-in at Bass Pro Shops in East Ridge en route to Arkansas to compete in a major FLW Tour event on Beaver Lake.

Neal will return to Dayton with other local pros, Andy Morgan, Wesley Strader, and Buddy Gross to fish the FLW Costa Series in two weeks.