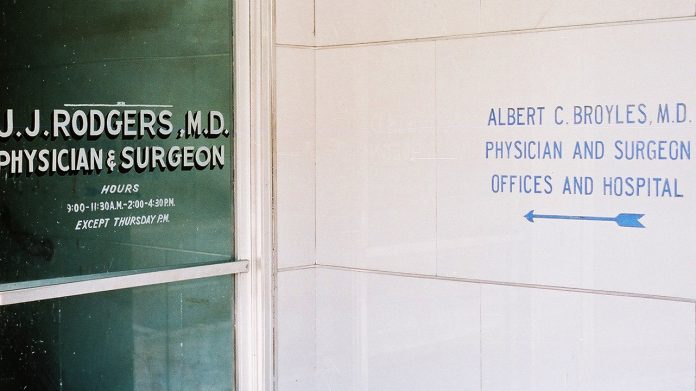 In the age we are living in, we find Doctor’s Offices, Clinics, Urgent Care Facilities, and off campus satellite emergency rooms from larger hospitals on nearly every corner. However, it was not always like this.

Looking back, we dig into Dayton’s past and find one extraordinary doctor who dedicated his life to caring for the town’s citizens. That man was Dr. Albert C. Broyles. Just two years prior to his death, he was recognized  for his some 50 years of medical service to the community.

It was on a Friday night June 9, 1961, that some 300 citizens from across Rhea County came together and paid tribute here to a beloved Doctor who brought most of them into the world as infants.

Dr. Albert C. Broyles was the guest of honor at an appreciation night banquet at Bryan College in observance of his 50 years of medicine. During these years, Dr. Broyles

delivered 4,643 babies, more than 4000 of them in Rhea County. He had operated Broyles Hospital here for more than a quarter of a century and had nursed most of the county’s population back to health on more than one occasion.

The 72-year-old white haired physician had just went into semi-retirement and the town’s citizens led by the Chamber of Commerce seized upon the occasion to express their gratitude.

Semi-retirement for Dr. Broyles meant the elimination of all major surgery, except in an emergency, and all obstetrics practice.

He, however continued to maintain an office and treat common illnesses for a while.

Dr. Broyles was born in Chattanooga on July 22, 1888. Prior to receiving his M.D. degree from the University of Tennessee in 1911, he was educated in the public schools in Hamilton County.

He moved to Rhea County in 1914 as a physician for the coal miners at Graysville, where he also served as Mayor for a short period of time. He traveled in a horse and buggy then and remembers one fee for delivering a baby was 12 bundles of fodder.

In 1923, Dr. Broyles moved to Dayton where he was quickly recognized as an able physician and surgeon. Before long he established a private hospital of 18 rooms that was equipped for the most modern forms of medical and surgical practice in the early 1930’s. His new hospital was located over the new Robinson Drug Store on Market Street in a building jointly owned by Dr. Broyles, John Godsey, and Earle Robinson.

The druggists of the county gave him an electric watch, the Dayton Lions Club presented him with a pen and pencil set, and the Dayton Chamber of Commerce gave him an engraved plaque.

Bob Norris was President of the Chamber of Commerce and presided over the banquet. Kyle Green made the presentation for the Lions Club and Richard Rogers represented the druggists in making the presentation.

Honoring Dr. Broyles at the 50-year celebration of practice in Rhea County were the first and last of the 4,643 babies delivered by him. The last was Karen Renee Smith the daughter of Mr & Mrs. Clayton Smith of Mountain View community in Dayton born October 6, 1960 and Mrs. Nell Barger Hicks of Graysville, TN was the first baby delivered by Dr. Broyles in approx. 1913.

After the death of W.C.Godsey, Dr. Broyles bought his home on North Market Street where he lived until his death in 1963. His wife Kate as she was referred to continued to live there until her death in 1977. Both are buried in Buttram Cemetery.

If you have old documents,photos or historical stories relating to Rhea County or its citizens that you would like to share, please contact the Contributing Editor below.

Courtesy of Yesterday In Dayton