Home Community Religion Learn a lesson from a Yankee Legend

“A Sad Tale of a Yankee Legend”

No other New York Yankee grabbed the limelight in Major League baseball quite like Mickey Mantle. The blonde haired, speedster from Oklahoma could hit them long and often. He was said to have been the fastest man in baseball from home to first base.

Mantle was the hero of the day. Every boy that loved baseball in the U.S.A. wanted to grow up to be like Mickey Mantle. Today’s media would have uncovered a hard drinking, carouser who went out frequently with teammates and invariably had “one too many”. Only at the end of his injury plagued career did the truth come out about Mantle’s less than heroic lifestyle. It was a lifestyle that led him to becoming an alcoholic.

Mickey’s father died at the young age of 39 from cancer. Mantle thought he, too, would meet an early demise. He lived and drank with the same intensity he played baseball. In his early sixties, when he had a liver transplant Mantle said, “If I would have known I was going to live this long, I would have taken better care of myself”.

Not only did Mantle ruin his life, but his actions had great impact on his family. His wife and four sons all became alcoholics. Shortly after Mantle completed a stay at a clinic for his alcoholism, his 36 year old son, Billy, died of heart trouble caused by years of substance abuse. On August 13, 1995, Mickey Mantle, one of the best to wear a Yankee uniform, died of cancer at the age of 63. Five years late his son, Mickey Jr. died of liver cancer at the age of 47. Mantle and his wife never divorced, but were separated for the last 15 years of his life. Mantle had all of baseball in his back pocket, but failed miserably with his family.

Before he died, Mantle tried to challenge young people to take a different path than he had chosen. He was truly sorry for the example he had set and tried to make amends for his wasted life. In the end, Mantle became a born-again Christian, due largely to the fact that former teammate Bobby Richardson had shared his faith with him.

Mantle was a hero to many, but adversely affected those he loved the most. Had he lived with the faith he possessed at the end, things may have turned out differently.

I was wondering today about the impact that we have on our families, athletes, and the people under our influence. So many times, like Mickey Mantle, we can accomplish some of the goals we want to in life, but hurt the ones around us in the process. The Bible says in Mark 8:36, For what shall it profit a man, if he should gain the whole world and lose his own soul. There are many who go out into eternity and have gained all the material things in life, but have missed out on a relationship with Jesus Christ. There are also many Christians who put so much time and energy into their jobs and ministries that they neglect their family.

Our lives and actions will impact others whether we want it to, or not. Let’s make sure that as we are pouring our hearts into our professions and ministries that we don’t ignore those closest to us. 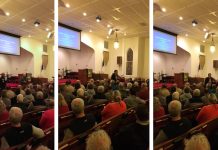