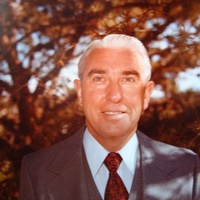 Born in Maryville, Jim was the son of the late John and Myrtle Steele Simerly.  He was a veteran of the U. S. Air Force and agraduate of Sanford University in Alabama with a degree in pharmacy.He and his family moved to Spring City in 1965 and opened Spring City Pharmacy. He retired in 1977. After retirement, he and Lena moved back to the Maryville area where he continued to work part time for several years. He was a member of the First Baptist Church in Maryville, Tennessee. While in Spring City, Jim and Lena were very active members of the First Baptist Church where he held several positions including serving as a Deacon, Trustee and singing in the choir. Jim was always active with Gideons International.

Jim was preceded in death by his brothers Clay Simerly and Enoch Simerly and sisters Juanita Wood, Georgene Norton and Imogene Blackburn.

There will be no visitation or services. As per his request, his ashes will be scattered over the Little River in Blount County.