Home Editor's Choice How Dayton reeled in the Big One

It’s a muggy June afternoon here on the banks of Richland Creek.

The Canada geese are out, per usual this time of year.

And here’s the scene driving up on a swarm of Dayton public works guys crowded around 90 feet of plastic dock in the water: two men, leaner than all the others, have hands clasped tight around a couple of thick, braided rope lengths, taut against the weight of what they’re moving and the force of their effort.

Their jailbird-stripe britches and orange T-shirts identify them as county jail trustees.

And there’s the man in charge — Dayton Mayor Gary Louallen, tall and gruff, in a way.

He’s standing on the moving dock, poised like Douglas MacArthur, and directing this scene. He’s trying to get the trustees to tow this deal upstream, where it will suffice as a bridge between two of the city’s lakefront parks during the upcoming B.A.S.S. tournament and outdoor expo.

Louallen’s confidence is contagious. There’s no doubt in his body language about whether this is going to work.

But that’s not a surprise.

There was never any doubt, as far as he’s concerned. Dayton, Tennessee is fishing country.

It’s the week of the tournament, and everyone’s eager to do this thing right.

The bells and whistles are out, local businesses hammer “Welcome Anglers” banners out front.

Louallen comes by his passion for this event honestly.

An avid fisherman, he for years followed the hobby around the country, fishing tournaments across the Southland and beyond.

And he was taking mental notes the entire time.

“I always thought if I ever did something like this, this is the way I’d do it,” he says.

He believes the simple things — like shuttling people to the outdoor BASSfest bazaar and weigh-in area or helping visitors find parking — will be the difference between here and everywhere else.

“The people here separate us from the rest of the world,” he says.

Louallen and Tumlin, along with Rhea County Executive George Thacker, rode a wave of new ideas into their respective offices.

Dayton for a long time hung its hat on the Scopes Trial, proudly — and for some, sheepishly — crowning itself Monkey Town, always trying to play up the landmark court case to lure in tourists.

But the novelty only got the town so far. A couple of years ago, the annual Scopes Festival totally fell through.

So four years ago, then-City Councilman Louallen presented a new idea: what about fishing?

“A bunch of us fishermen got together and said, ‘Hey, let’s try this,’” he remembers.

He pitched the idea and started making some calls. In 2011, Dayton narrowly missed hosting The Bass Federation’s national championship tournament.

The city’s facilities weren’t good enough, organizers said. So the city tore them down and started over. Gone was the tiny brick bait shop that had squatted waterside since the 1950s.

The city paid somewhere near $150,000 to build a new, 3,200-square-foot facility — complete with a restaurant, bait and tackle shop and fuel.

It’s operated by Michael Neal, son of Rhea County Sheriff Mike Neal. The younger Neal fishes on the FLW Outdoors tour and has earned a quarter of a million dollars in his brief pro career.

Since the new boat dock went up, Dayton has landed several large tournaments, including a four-day FLW tournament last summer.

“The city council bought into the vision that we need world-class facilities to host these types of events,” says Tumlin. 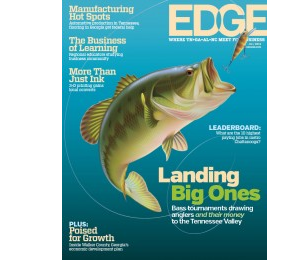