Roy Boone pulled all the money out of his wallet, scrounged through every drawer in his bedroom, dug through his dirty pants pockets and even pulled up all the cushions on the living room sofa and chairs. All he came up with was $14 and some change.

He knew that wasn’t nearly enough to buy his Dad much of anything he really needed or wanted for Father’s Day. Although it was always hard to know what his Dad wanted anyway. Whenever anybody asked, his Dad always said, “I’ve already got everything I want.”

Roy’s Dad worked hard to provide for the family. He and his Mom had even bought Roy a new hunting dog. Rock was Roy’s constant companion, and a great hunter.

With the money he had Roy figured he could buy his Dad a box of shotgun shells. Maybe he would tag along and use them to shoot some squirrels with Roy and Rock. But looking over at the family gun rack, with stacks of shotgun shell boxes nearby, Roy knew adding another box to the stack wouldn’t mean much. Besides, while Roy’s Dad enjoyed hunting and fishing, he wasn’t nearly as passionate about it as Roy or Grandpa.

It had been well over a year since Grandpa suffered his latest heart attack. He had almost fully recovered. Nowadays he spent a lot more time walking in the woods or working in the garden, rather than rocking on the front porch. Roy wandered out to the garden where his Grandpa was hoeing weeds under a blazing sun.

Roy picked up the extra hoe and settled into the row beside his Grandpa. The two weeded in silence for several minutes until Grandpa asked, “What’s up with you? I know if you came out here to weed voluntarily, somethin’ must be on yer mind.”

Roy whacked hard at a particularly stubborn pigweed root, coming close to whacking down a tomato plant in the process.

As usual, Grandpa didn’t say anything right away. He just continued to chop away with his own hoe, killing weeds and loosening the dark, rich soil.

Finally he said, “You know, the best thing your Dad ever got me for Father’s Day he didn’t even buy. He made it himself.”

“You’ve probably seen it a thousand times,” answered Grandpa. “It’s inside, in my bedroom. I’ll just let you see if you can figure it out.”

Roy’s hoe hit the ground and leaping over the tomato plants, he was gone in a flash. Wandering around his Grandpa’s bedroom he eyeballed everything. At first glance, nothing jumped out at him. There were pictures on the wall, various clutter on the nightstand and on the dresser — the kind of stuff we all accumulate. Some of it gathers day-to-day… while some hangs around for years. Roy examined everything closely and was getting frustrated. He thought maybe he needed more light and reached up to grab the pull cord on the overhead lamp. That’s when he saw it hanging on the end of the pull cord.

He couldn’t believe he hadn’t ever noticed it before. Actually he had noticed it. He just took it totally for granted. He had no idea it was something homemade by his Dad. He held it between his fingertips and on close examination, it was easy to see all the flaws that made it unique. This clearly didn’t come from an assembly line. It was one-of-a-kind.

“You figured it out, huh,” said his Grandpa, standing in the doorway.

“When did Dad make this,” asked Roy.

“Let’s see now,” pondered Grandpa, looking upward, trying to see into the past. “If I recollect right, it was the same year he broke an arm playing baseball. I ‘member that cause I can still see his arm in that cast as he handed that to me. He was 15, hadn’t started drivin’ yet so that would have made it about 1976.” 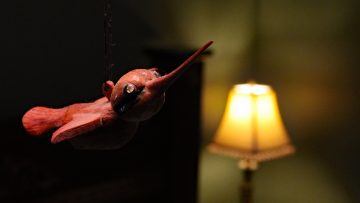 Roy marveled that the little carving of a hummingbird had been around for 41 years. And that it apparently held such a special place in Grandpa’s heart, even though it surely didn’t cost his Dad a dime.

“Can I borrow your sharpening stone Grandpa,” asked Roy.

Grandpa knew exactly what Roy was going to do with the stone and very soon he heard the soft rasp of steel blade on stone from the front porch. He looked out the window and saw Roy sitting on the front steps, Rock curled beside him. The teenager repeatedly dragged his pocketknife over the stone, stopping every so often to touch and test the blade before setting back to work.

Grandpa had no idea what the boy had in mind to make, but he knew full well that his son – Roy’s Dad – was going to love it.

Previous installments of ‘He Called the Woods Home’: