Organizers in Graysville have assembled an all-star lineup to celebrate this year’s Fall Festival to be held this Saturday, September 19. 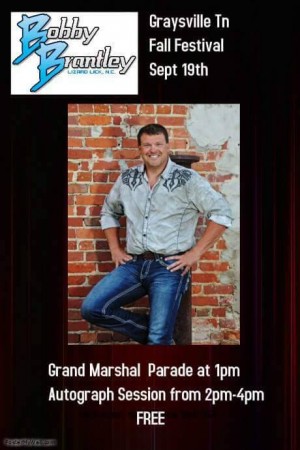 Festivities begin with a parade at 1 p.m. led by Grand Marshal Bobby Brantley.  Brantley made his claim to fame on the hit Reality TV show “Lizard Lick Towing” on truTV network.

“We’re expecting a huge crowd.  We’ve planned for a big crowd.  We have something for everyone,” says event organizer David Sulcer.

Sulcer says don’t worry.  Everyone will have an opportunity to meet Brantley during an autograph session between 2-4 p.m. at Kristopher’s Kingdom Park.

From jazz to country to gospel, Sulcer says there’s music for everyone.

The festival also boasts of over 30 vendors which include favorites such as BBQ, Funnel Cakes, and Cotton Candy.  There will also be crafts, woodworking, and jewelry vendors on hand as well.  Holes to Go will also be on location with a 9-hole miniature golf course.

The parade will begin at 1 p.m. in front of Graysville Seventh Day Adventist Church and proceed to Dayton Avenue on to Pikeville Avenue where it will continue to Kristopher’s Kingdom park.

For parade goers, please park at City Hall, Post Office, or Graysville Seventh Day Adventist Church as Dayton Ave and Pikeville Ave. will be blocked off from 12:30-2:00 p.m.

Graysville’s walking track will be dedicated as the “Emily Cheeks Memorial” Walking Track in a ceremony held at 7 p.m. with music by Billy Sims and wife.