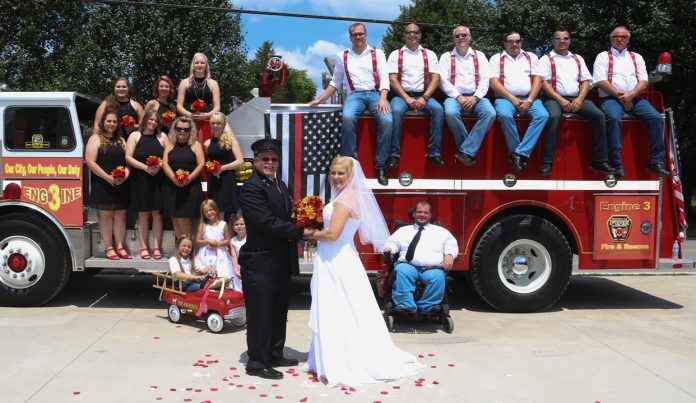 On Saturday, August the 11th, Jimmy Massengill married the love of his life, Rena Fagan, in a formal wedding ceremony held at the City of Graysville Fire Department.

Since the groom is the Mayor of the town and both he and his fiancé are members of the fire department, they decided where is a better place to get married than at the fire station.

The groom is employed by Thompson Carriers and the bride is a ten-year veteran in the health care industry employed at the Life Care Center in Dayton. The ceremony was preformed by Pastor Archie David Poole of the Coulterville Baptist Church. Family, friends, and town’s folk watched on as the two became united in holy matrimony.

A reception followed the ceremony in the municipal building, where the newly married couple enjoyed food and fellowship with their guests. Jimmy is known throughout Graysville as a caring and giving person. Although he carries the title of Mayor, when he’s not at work or conducting official city meetings, he can be found out in the community lending a helping hand to city department employees with whatever project or job they are working on.

Jimmy has been associated with the city since 1991, when he first joined as a volunteer firefighter. Since that time, he has held the positions of Assistant Fire Chief, Fire Chief, Councilman, Vice Mayor, and currently Mayor of Graysville. The couple would like to thank everyone who made their day so special. They are planning a Caribbean Cruise honeymoon later in the fall.