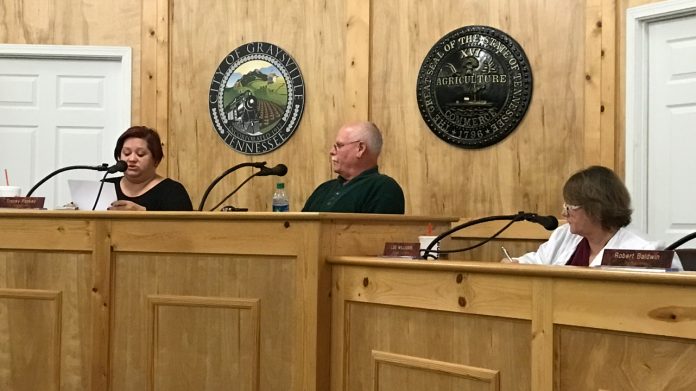 On Tuesday evening, the City of Graysville Commission met for their monthly meeting at City Hall. All commissioners were present for the meeting. The meeting was called to order by Mayor Jimmy Massengill. Prayer and the Pledge to Allegiance were held prior to conducting the city’s business.

Working through a full agenda, the commission breezed through with unanimous support on all but one item on the agenda. When the discussion for the need to purchase three police cruisers was brought before the commission, it was met with opposition.

Police Chief Julie Tanksley reported that the current police cars are just plain worn out. She further explained that there had been times that we were down to just one cruiser due to the others being in the shop for repairs and how that it’s vital that the Police Department have reliable vehicles for our daily use.

Mayor Jimmy Massengill informed the Commission that Graysville has the opportunity to purchase three brand new Dodge Police cruisers in a Lease-to-Purchase option. The cost would be $19,000 a year for a total of five years. The vehicles would be paid for with money in the drug fund each year and the balance would be subsidized from the annual budget.

Mayor Massengill stated that the City had patched and band aided these old cruisers for far too long. He continued to explain that he didn’t think anybody here would disagree that the City was in need of replacing the old ones. I think the money that we already have in maintenance fees would almost cover the price of the new cruisers.

Commissioner David Sulcer stated that he fully understood the need for these new cruisers, but this is a lot to put on our citizens to pay. Vice Mayor Cook questioned, “Could we just purchase 1 or even 2 cruisers”?

Mayor Massengill explained to the Commission that in the long run the City is getting a better deal and would benefit better by purchasing all three. There is also an 84-month option available, which would lower the yearly payment to $14,220. This would be a significant savings per year on the payments, however we would be paying more interest in the long run.

Commissioner Robert Baldwin gave his full support in purchasing these cruisers for the Police Department. These men and women put their life on the line and we owe it to them to provide them with the best and safest equipment possible. Citizens present at the meeting spoke up in support of purchasing the cars for the police department.

Mayor Jimmy Massengill made the motion that the City enter into the Lease-to-Purchase using the 84 month option to purchase three new police cruisers. This option would be paid for by money from the drug fund and subsidized  by the city budget each year.

In other city business, the Commission voted to install crosswalks with signs at the intersections of Pikeville Ave & Harrison Ave and also on Long Street at the School.

The City also voted in support of changing their internet service provider from Volstate to the E.P.B.. Mayor Massengill reported that in the long run the city would receive a better deal cost wise and have better equipment and additional internet speed.

Commissioners voted to accept contract with Alvin Cook, Engineer to begin repairs and upgrades to a portion of the City’s water lines on Hwy 303 near Hwy 27.