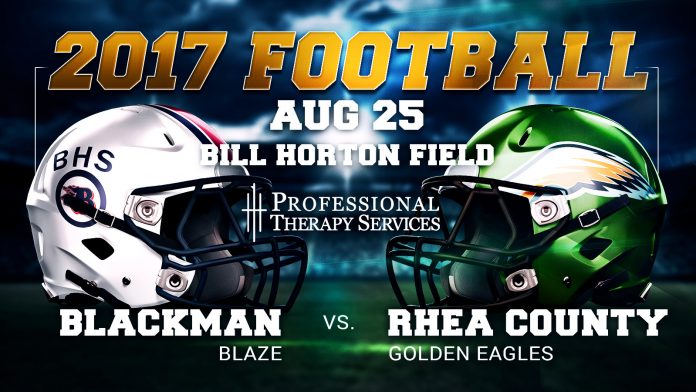 While last week did not go as hoped, the season marches on as the Eagles are set to play the Blackman Blaze from Murfreesboro inside the friendly confines of Eagle Stadium this Friday night.

The Eagles and the Blaze have never met before on the gridiron, and both storied programs come in to this week’s contest ranked within the Top Ten of their respective classes. Blackman, after a 63-28 pounding of Hendersonville, are the second best team in 6A according to the Associated Press poll, falling just short of #1 Maryville who took the top spot after defeating Knoxville Catholic in their season opener.

Rhea County, despite starting the season on the wrong side of a last-second thriller, remained in the Top Ten in 5A, coming in at #6.

Here’s a look at our Week Two opponent.

No stranger to challenging road games, the Blaze roll in to Evensville, one of the loudest environments in all of Tennessee high school football, looking to improve to 2-0 on the season and notch a win in their inaugural matchup with the Golden Eagles.

In two short years at Blackman, David Watson (head coach/offensive coordinator) has accumulated an impressive 19-7 record (10-3 in 2015, 9-4 in 2016) competing with the likrs of Oakland, Maryville, and Bradley Central. The Blaze are well coached and will more than likely be ready for the hostile territory of Bill Horton Field.

Players to watch out for:

Master Teague (#33, running back, senior)
-Teague, an Ohio State commit, is a beast of a running back. He is known far and wide for his muscle and grit, but is also a dangerously speedy runner, making him a big threat running and catching the ball.

Adonis Otey (#1, wide receiver/corner, junior)
-Speaking of speedsters, Otey (a former Vols commit) is another burner. Whether it is catching the ball or covering receivers, he shows elite speed and is a natural playmaker.

Trey Knox (#13, wide receiver, junior)
-Once again, we have another solid, speedy receiver. Knox, with offers from schools such as Ohio State, Florida, Louisville, and Tennessee, is one of quarterback Connor Mitchell’s favorite targets.

Kaleb Laws (#28, tight end, junior)
-One of Rhea County’s off-season additions, Laws, a 6’6 monster of a player, replaces 3-year starter and current Memphis Tiger Jared Edwards at tight end. While mainly a blocker, Laws proved to be an effective weapon in the passing game as well, hauling in a 60+ yard TD pass during the jamboree.

Bradley Evans (#84, defensive tackle, senior)
-Evans, one of last season’s most productive pass rushers, is a wrecking ball on the defensive front, posting seven quarterback sacks as a junior. With a great motor and exceptional play recognition, expect to hear his name a time or two on Friday night.

Jaden Austin (#4, wide receiver, senior)
-Jaden produced one of the brighter moments from Friday night’s loss, using his speed and quality catching ability to haul in a 41-yard touchdown strike, his first as an Eagle, from junior quarterback Zack Pemberton on first drive of the game. He was also awarded player of the game by Southeast Bank for his efforts.

Outlook: The Blaze are a tough out for any opponent. However, so are the Rhea County Eagles. I foresee this game being a tale of two offenses. It could very well be a quick scoring track meet in helmets when the Blaze are on the field and a long, methodical drive producing, clock control offense when the Eagles have possession.

If Rhea County can slow down Blackman’s offense and clean up the penalties and turnovers that cost them dearly against the Blue Raiders, I can see the Eagles pulling out a win.

I have a feeling starting placekicker Haden Frasier might be the hero Rhea County needs to seal the deal and take a 1-1 record into next week’s region opener at Walker Valley and get the Eagles’ first win of 2017.