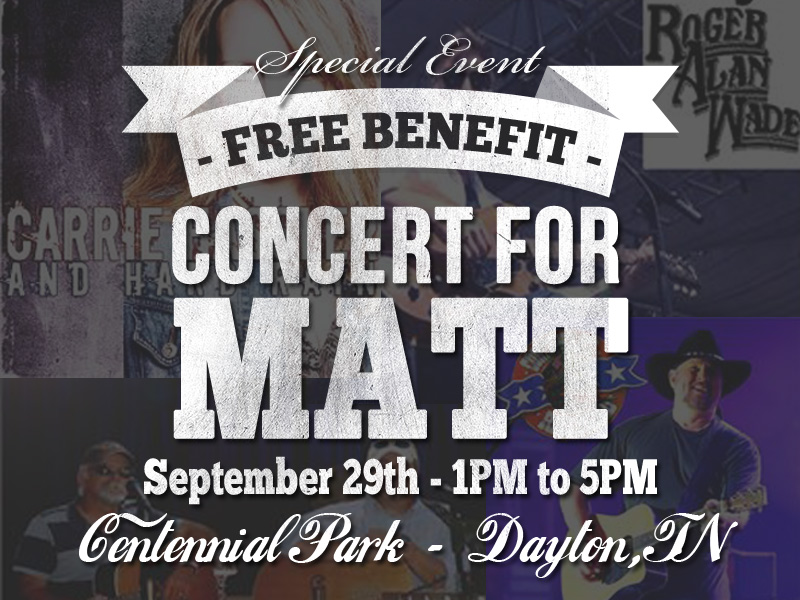 You won’t want to miss this legendary musical line-up this Sunday at Centennial Park in Dayton, TN. The event will feature a collection of artists including local favorite “The Other Guys”, bluegrass sensation Carrie Hassle, Danny Shirley of The Confederate Railroad, and legendary singer/songwriter Roger Alan Wade. The artists have come together in order to raise money for a great cause. All donations will help pay medical bills for Matt Wilson.

Matt is a 23-year old graduate of Rhea County High School and proud father of 3 beautiful children. It has been a tough 9 months for Matt. He has been to the hospital 10 times and 2 visits involved major surgery. He is scheduled to have 2 more surgeries before he can fully recover. Please come out show your support for this young man and his family.

This is the only way a bunch of musicians know how to raise money… I really appreciate these artist doing this on their own time.

Neal Nichols – The Other Guys

Local favorites Neal Nichols and Troy Byrd have entertained Rhea County and the Chattanooga area for over 5 years. Neal Nichols has deep roots in country music and is responsible for organizing this event. Before Mr. Nichols came to Rhea County he played bass guitar for Danny Shirley and Roger Alan Wade. He later became a popular radio personality as “Cactus Jack” on TC105.  Nichols has become a positive influence in the Rhea County Community.

Rural Rhythm Records artist Carrie Hassler is known for her soulful country vocals. Carrie has numerous #1 albums and #1 singles which have garnered great attention and helped her to cross many genres of music over the last several years. Carrie is from neighboring Bledsoe County and is no stranger to the top of the bluegrass music charts.

Roger Alan Wade has penned songs for country legends such as Johnny Cash, Waylon Jennings, George Jones and Hank Williams, Jr (Country State of Mind). He embarked on a solo career with the promotional assistance of his cousin, actor Johnny Knoxville. Wade is known for his satirical music but has taken a more serious tone with his latest albums, Deguello Motel and Southbound Train. Wade is currently co-host of “Outlaw Country” on SiriusXM with cousin Johnny Knoxville.

Danny Shirley of Confederate Railroad has been keeping outlaw country alive for over 30 years. The group founded and led by Shirley won the Academy of Country Music’s Best New Group Award in 1993 as well as numerous nominations from the Country Music Association and the British Country Music Foundation. Shirley’s performances are known to cover a wide range of feelings from rowdy country to raw emotion. Be prepared for a great time as Danny Shirley is a superb entertainer.

Make sure to bring lawn chairs. There will be food served such as hamburgers and refreshments. Again this is a free benefit concert, but donations will be accepted and appreciated. All donations will go to the family of Matthew Wilson to offset medical expenses incurred recently. There will also be an auction with items including a guitar that can be signed by all entertainers.

Everyone is encouraged to come out, enjoy themselves, and support this young family through a tough time.