Eight former Eagles are now playing in the college ranks, and we want to highlight their successes as they continue to advance their careers on the gridiron and in the classroom.

Coach Mark Pemberton says he’s most proud of seeing these players keep football as a central part of their lives, and the fact it’s helping pay for their education is the most important part.

“Anytime you can see a kid go on and further his education through football is a big deal.  The main thing is that they get their education.  We’re really proud of them. ”

“We’re proud of all our guys who’ve gone on to play college football,” said Pemberton.  “We have some guys who are having really good careers.”

“They’re all really good kids, and we wish them the very best.”

One of the biggest and brightest stars in Rhea County’s recent history is none other than defensive specialist Tyler Pendleton.  This Class of 2016 linebacker left Evensville with 390 career tackles, 253 solo tackles, resulting in an average of 10.5 tackles per game.

Pendleton will enter his Junior season the University of Cumberlands and has already been named MSC Appalachian Division Player of the Week for a 17 tackle performance against University of Pikeville on October 14, 2017.

His collegiate career totals are up to 93 tackles with 10 for a loss. 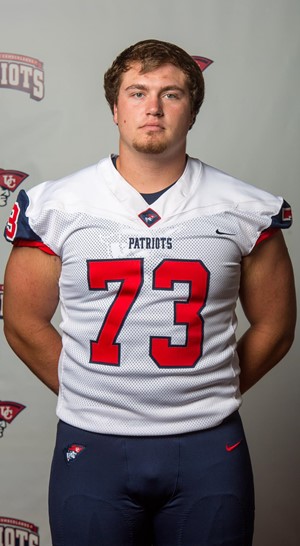 Gavin took Pendleton’s lead when it came to choosing the University of Cumberlands, and the two have roomed together ever since.

Downey, who’s added about to 20 pounds to his 6′ 4″ frame, has transitioned from a lethal defensive tackle where he’s credited with over 112 tackles, three interceptions, and five sacks in high school, to serving on special teams as a punter.

Look for Downey’s stock to rise as he sees a more reps this season.

At 6′ 4″, 256 pounds, big Jared Edwards had a host of D1 offers, but now he has no doubt he made the right choice to become a Memphis Tiger.

After one year and two knee surgeries spurred on by an injury he suffered during the Toyota East-West All-Star Game his senior year, Edwards is getting stronger and faster.

He’s also making the grade.  Edwards was named to the Dean’s List in the spring of this year.

Look for “Big Country” to begin making a major impact for the Tigers this season.

“We’re bringing a lot of people back, so we have a good chance to win a national championship,” says Meechie.  “That’s what we’re working for.”

Since graduating from Rhea County’s Class of 2014, Meechie has been on a few college rosters – none of the least of which is University of Tennessee.

Meechie totaled 2,441 all purpose yards for the Golden Eagles which brought his average to over 100 yards per game during his junior and senior seasons.

Look for Meechie to fit in nicely with the Blue Raiders offense and make an immediate impact.

“So far I like it up there (Colombia, KY), it’s a good fit,” said Eddie.  “Since I’m from a small town, I like being in another small town so I can keep my head on while I’m up there.”

Davis says they have a good team this year, and he’s working hard to represent for his family.

Eddie is credited with one of the most memorable plays in Rhea County history with a perfectly timed PAT block to seal the win (14-13) in a quarterfinal match-up against rival Ooltewah.  He’ll always be remembered as a relentless athlete who contributed in many wins on

both sides of the ball for the Golden Eagles.

James Sharp, another Class of 2016 grad, was the first of the three to suit up in that rich Lindsey Wilson blue.  Last season, the Blue Raiders went undefeated in conference play (6-0), undefeated on the road (5-0), and 11-1-0 overall.

Sharp and company (Davis and Patterson) have been playing together since before grade school.  Look for them to build on that chemistry to push each other every practice and every game..

Sullivan, who graduated this year, enjoyed a stellar career as a Golden Eagle. He says his time at Rhea County has prepared him for anything the future holds. 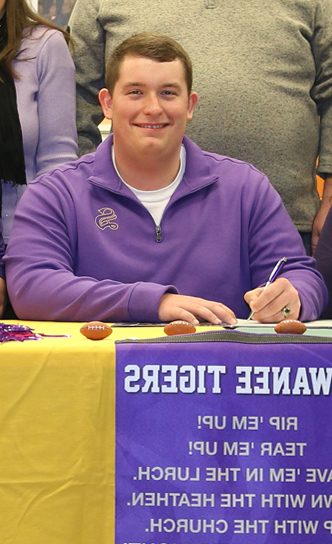 Sewanee: The University of the South

On the gridiron, Swafford is known as a long snapping specialist and hopes to make an immediate impact.

In addition to football, Swafford has been asked to join the track and field team where he’s a standout in the shot put event.

Swafford left RCHS with a 3.9 GPA and he’s looking to major in politics and minor in history on a pre-law track.

We wish all of the Golden Eagles the best as they keep working.  On the field.  And in the classroom.  Go Eagles!