Home Community Dayton’s Greenway Project: A Look into the Future

With help from a $348,477 grant from the Tennessee Department of Transportation, construction for the first phase of Dayton’s Greenway Project is set to begin this year.

Phase One will construct a lighted walking track starting at the north Point Park entrance under Highway 30 then Highway 27.

The path will continue around Dayton City’s football field and finish at Market Street near Garrison’s Funeral Home.

(see pink path in illustration below)

Looking for a solution, ideas emerged that not only addressed safety concerns, but imagined a healthier, more connected community as well.

On October 16, 2014, Tumlin, Mayor Louallen, David Holcomb (chair of Rhea’s Healthier TN Communities – RheaFit.org), and others loaded up in a Bryan College bus for a meeting with Cleveland’s Greenway Committee Chair, Cameron Fisher, to understand how they brought their project to life.

Fisher who had been part of Cleveland’s Greenway project since 2004 shared his story and told the group, “the greenway has transformed our community”.

CBC Greenway in Cleveland
1 of 6

“It’s something that everybody seems to agree – it’s a boost for economic development and great for the community.  For us, it’s been an asset from the very beginning,” states Fisher.

Leaving inspired and equipped with insights, Tumlin began applying for every grant possible.

After being rejected by in 2015, he quickly revised his proposal to fit in with TDOT recommendations.

Tumlin also brought together community leaders including the Dayton Chamber of Commerce, Dr. Stephen Livesay of Bryan College, Mayor Louallen, Senator Ken Yager, and Representative Ron Travis who each wrote letters of support for the project.

After resubmitting the grant in 2016, Tumlin found great partners in Representative Ron Travis and wife Laura.

“Ron and I followed up almost bi-weekly with TDOT in Nashville showing our support of the project.”

“It was truly a team effort,” insists Tumlin.

“RETC was a catalyst, but the Healthier TN Communities Committee (chaired by David Holcomb) and Bryan College as well as Mayor Gary Louallen have ‘carried the torch’ for about two years now to get us to this point.”

It’s gonna be a big plus for our community,” said Mayor Louallen.  “It’s healthy and it’s safe.”

Once complete, Louallen says the new greenway could see “more traffic than the walking track”.

Soon mother’s with baby carriages and people in wheelchairs will be able to safely cross the highway without facing traffic.

“We hope to get Phase II which will allow students to pass through in front of Bryan College,” adds Louallen.  (see blue path in illustration above)

“This is gonna be huge for you guys,” claims Cameron Fisher of Cleveland’s Greenway.  “The community connectivity will be a game-changer.”

Grant funds for Phase One will be available this fall and Tumlin hopes construction can be completed during the winter while the lake levels are down. 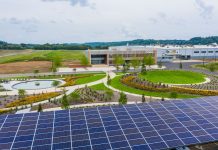