(Dayton, TN) – GeoSurfaces North East is honored to announce that five-time Super Bowl champion, the New England Patriots, and Major League Soccer’s New England Revolution will now practice on IRONTURFTM, at the Empower Field House. IRONTURF is manufactured in the United States by Greenfields USA.  The just-completed field is approximately 80,000 square feet and is lined for both football and soccer.

This project is the culmination of a successful trial installation of IRONTURF done in 2017. After testing for more than a year, IRONTURF was selected for the Empower Field House installation.

“We compared IRONTURF with other turf products and after a thorough review process, we decided on IRONTURF for its real grass feel and durability,” said Jon Bengtson, for the New England Patriots and New England Revolution.

Since its introduction in 2017, IRONTURF is quickly becoming the turf of choice for the country’s most demanding sports venues, with recent installations at Charlotte Motor Speedway and a MLS soccer complex for Sporting Kansas City.

GeoSurfaces, an exclusive distribution partner of GreenFields USA, has completed several other installations of IRONTURF, including a football field at the University of Arkansas – Pine Bluff, a softball field at Baylor University in Waco, TX and a baseball field at Pearl River Community College in Poplarville, Mississippi.

For information about GreenFields, visit www.greenfieldsusa.com.

GreenFields’ game-changing IRONTURF technology is revolutionizing the turf industry. Engineered specifically for football and other high-impact sports, IRONTURF provides unmatched playability, durability and safety—all without sacrificing a high-quality look and feel. IRONTURF is a 50/50 woven blend of the toughest TenCate fibers—durable XP and playable Diamond. The unique interlocked fibers create a surface that stands up to the nation’s toughest sports. Learn more about IRONTURF at www.ironturf.com.

GeoSurfaces is a Professional Engineering Firm that specializes in the design, development, construction and installation of high performing sport surfaces, shock pads and structural base systems.  With offices in Louisiana, Georgia, New England, Ohio, Illinois and North Carolina, GeoSurfaces is a “turn key” provider for sports field solutions.

GreenFields develops, produces, supplies and installs innovative synthetic turf systems in collaboration with and as part of the TenCate Grass Group. GreenFields now has sales partners in more than 100 countries and ranks among the frontrunners in the market in a variety of sports, including hockey and football. Learn more about GreenFields USA at www.greenfieldsusa.com. 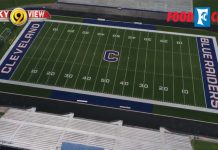