Dayton, TN —  Dayton City School prepared for their opening game of the 2018 with an appearance at the Warburg Jamboree and fans and coach are excited about the upcoming season.  After three wins last year, coach Hughes is looking for even more wins in 2018.  At the jamboree the Sweat Bees showed some quick strike ability with two long runs.  Rex Pendergrass and Bryce Dupree each had long runs for touchdowns.  With short duration of game in jamboree, Robbins kept the defense on the field a while with their long drives so DCS did not have any long drives that coach Hughes would have liked to have seen.  Ready or not, Grundy comes to Dayton for the opening game with 7 pm kickoff on Thursday night.

DCS has a roster of 34 players this year, the most in the five year tenure of coach Paige Hughes.

“The line is coming along pretty good this year.  We have seven guys who can step in there and do the job.  In years past you really didn’t have that.  You had people playing out of position.”

Dayton City lost nine players off last year’s team and several are playing at Rhea County High School.  The Sweat Bees will be looking to replace those players and will have experienced team with only one sixth grader on the team.” 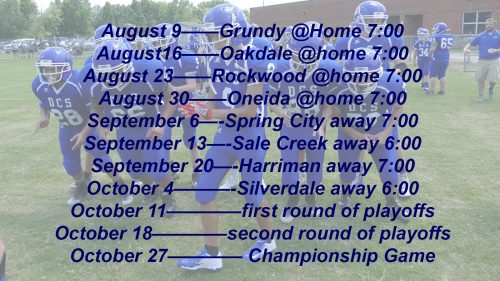