Home Lifestyle Entertainment Concert for Matt was a Huge Success 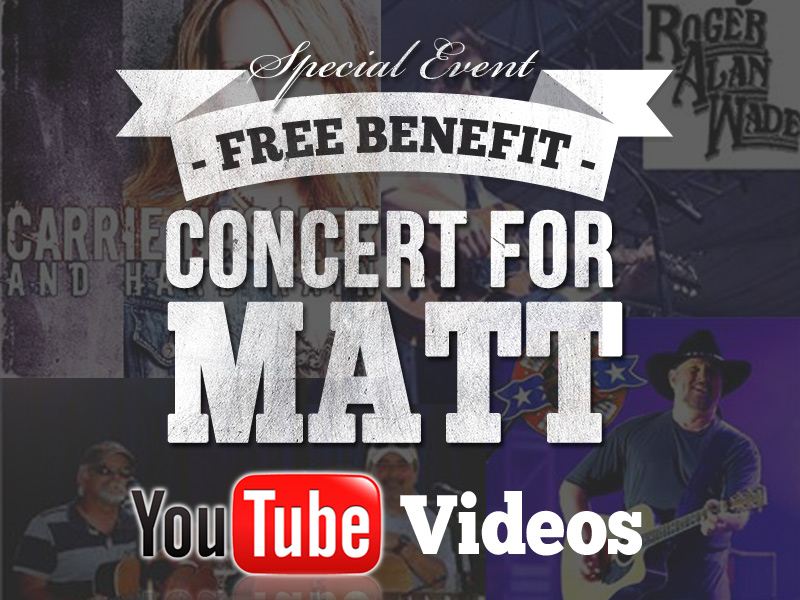 The benefit concert held Sunday at Centennial Park in Dayton, TN was a huge success. The event was a benefit concert for a great young man, Matt Wilson, and his family. Local favorite The Other Guys, bluegrass vocalist Carrie Hassler, singer/songwriter Roger Alan Wade, and Danny Shirley and other members of Confederate Railroad entertained the crowd to raise money for Matt and his family.

All the donations and all the love were more than we could have ever hoped. We appreciate everything.

Neal Nichols – The Other Guys

Among the artists was Bob Stagner, a Pearl Drums sponsored percussionist, who is known for his work with the TRAP program (The Rhythm Arts Project). Stagner, one of the area’s top percussionists, accompanied The Other Guys and Roger Alan Wade on the stage. Neal Nichols, of The Other Guys, was instrumental in organizing this event. Neal and his wife Sherry stress how much they appreciate everyone in the community for coming out and supporting the event. Nichols also stresses how much he appreciates all the artists for donating their time and for putting on a great show for a great cause. Nichols adds a special thanks to Mark Dufresne, drummer for Confederate Railroad, and his wife Doris, for attending the show and supporting the cause.

The Other Guys, Neal Nichols and Troy Byrd, have entertained Rhea County and the Chattanooga area for years. The duo was joined by percussionist Bob Stagner (who is sponsored by Pearl Drums), and they rocked Centennial Park, Sunday at the Concert for Matt. The Other Guys were the first group to hit the stage, and they certainly kicked the event off right. The group performed some of their favorite covers and their own rendition of the Tennessee anthem, Rocky Top.

Rural Rhythm Recording Artist, Carrie Hassler mesmerized the crowd Sunday with her powerful soul-filled vocals. Carrie performed some of her favorite covers and also sang songs from her new album “The Distance”. The last song on the video is a breathtaking version of “Going Back to Harlan”, a song made popular by Emmylou Harris. Carrie is accompanied by Neal Nichols and Troy Byrd from The Other Guys Band in the song. Carrie is a class act that you won’t want to miss if you get the opportunity to see and hear her in person.

Roger Alan Wade is one of the most brilliant songwriters of our time. Wade has penned songs for country legends such as Johnny Cash, Waylon Jennings, George Jones and Hank Williams, Jr (Country State of Mind). Wade was on top of his game Sunday and delivered big for the crowd at Centennial Park, Dayton, TN. Roger is joined on stage by Pearl Drums sponsored percussionist Bob Stagner. It was certainly an honor and a treat to have a legend such as Roger come to Rhea County.

Danny Shirley and members of the Confederate Railroad

Danny Shirley and his band of outlaw country artists came to Dayton, TN for the benefit Concert for Matt. Danny was joined on stage by Rusty Hendrix and Bobby Randall (you may remember Bobby who started the Sawyer Brown Band). Confederate Railroad drummer Mark Dufresne was also in attendance and signed a guitar with the other performers. Danny Shirley and company put on a great show and was a huge part in making the event such a success. Confederate Railroad has a loyal following and the band always has time for it’s fans. Band members gave autographs and took pictures with their faithful following.