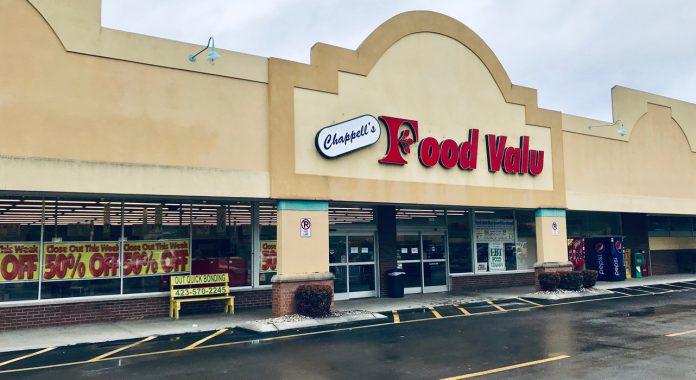 Generations grew up with the ability to run just down the road to their local grocery store when they needed some items. Over the years that became a little more difficult to do with the community growing and traffic increasing on the Hwy’s.

Well this task has just become a little bit more difficult as North Dayton’s only grocery store is set to close today. Chappell’s Food Valu located in the Richland Park Shopping Center will close their doors permanently today after a 16 month attempt at reviving the former failed ShopRite Super Market.

Chappell’s acquired ShopRite in October of 2017 after ShopRite had been struggling and eventually filed bankruptcy. According to a post on Chappell’s Facebook Page, they restocked the store with fresh products and made some renovations but were never able to regain the business that was lost during the ShopRite bankruptcy.

For the past few weeks, customers have been filing through looking for bargains and saying their goodbyes to their favorite cashiers. The discounts grew larger as closing day grew closer. This morning the store front read “50% Off Everything”.

Chappell Food Valu representative Mike McGuire said they were so sad to be closing. “We’ve done everything we possibly could to save the store but could not recover it.  It was too far gone when we acquired it”, said McGuire.

The very first grocery that opened here was the M&J Supermarket which had moved from downtown across from the Rhea County Courthouse. A few years later, M&J Super Market was acquired by Pruitt’s Super Market where they continued a few years and were obtained by ShopRite Supermarket. ShopRite remained steadfast for many years, even making an expansion to the store in the 1980’s.

According to Mr. McGuire, as far as he knows, there are no plans from any other company to move a new grocery store in its place.  It’s sad for the community and employees who have made this part of their lives. Especially for one Chappell employee Teresa Fugate, she has worked in this grocery store from day one with the M&J Market. “Most all of the employees have already found new jobs and we wish them all the very best”, said McGuire.