It is one of nature’s most fascinating spectacles. No doubt you’ve seen pictures, or video, or maybe even witnessed the dramatic upstream spawning runs salmon make in Alaska every summer.

You probably didn’t know however, that you can see the same kind of spectacle every April in Polk County and perhaps other area streams. It is the annual spawning run of smallmouth buffalo and black buffalo.

The buffalo is a carp-like fish that is plentiful in the Tennessee River system. However they eat primarily vegetation or algae and rarely, if ever, hit a fisherman’s lure. Hence, many people don’t even know they exist. Commercial fishermen know they exist however. Next to catfish and paddlefish, buffalo are one of the most sought-after commercial fish species in the Tennessee River.

When the water temperature hovers around 60 degrees, and the water conditions are right, it comes time for big buffalo to make baby buffalo.  Many migrate into small streams such as the Ocoee River in Polk County. Citico Creek in Monroe County is another stream known for it’s buffalo spawning run. Unlike salmon that make lengthy runs, buffalo come and go to and from their spawning territories in a hurry. Sometimes they are there and gone within a three or four-day period. Only the people who actually live along the river might know when it happens, awakened at night by loud splashes coming from the shallow water.

“Sometimes it looks like you could walk across the river on them without getting your feet wet,” said Brian Christensen. “Some of them are huge. I’ve seen some that look like they could way 20 or 30 pounds.”

We sat in Christensen’s backyard overlooking the Ocoee. The water had risen from early morning due to releases from the Ocoee Dam upstream. But up and down the river we listened and watched as groups of spawning buffalo exploded on the surface. Christensen had kayaks on hand so visitors could paddle out and watch the big fish up close and personal. When they’re spawning, the big fish aren’t nearly as wary as they would normally be in the clear water.

It was easy to see the larger females cruising along, followed by several smaller males. Suddenly, a big female would dart to mid-stream, rising to the surface. The males quickly follow converging, bumping and rolling as the female splashes the surface depositing her eggs.

The fertilized eggs are dispersed by the current and drop to the bottom, adhering to rocks and vegetation. The adults abandon the eggs and head back downstream as soon as their propagating is done. When the eggs develop into swimming fry, they wash downstream and back into the lake.

Historians believe Native Americans depended heavily on the buffalo spawning runs for food. In modern day, a few anglers who try to stay in tune with the buffalo runs like to snag them for sport.

“Snagging a full grown female is like setting the hook into an armored police vehicle,” said Heath Jordan. “Just hold on because it will be all over when she decides it’s over.”

Jordan has captured his exploits and the buffalo spawning run on video several times over the years.

Chances are by the time you read this, the Ocoee buffalo run will be over and done. But stay tuned because it’s an annual event that is worth watching when you can time it right. 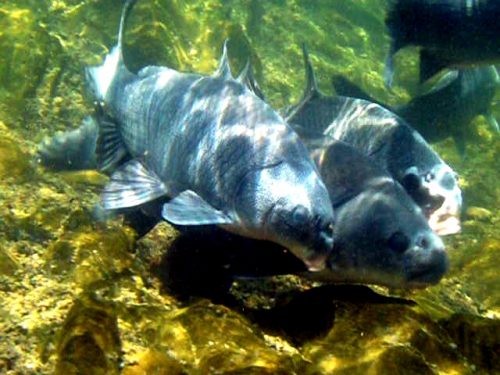