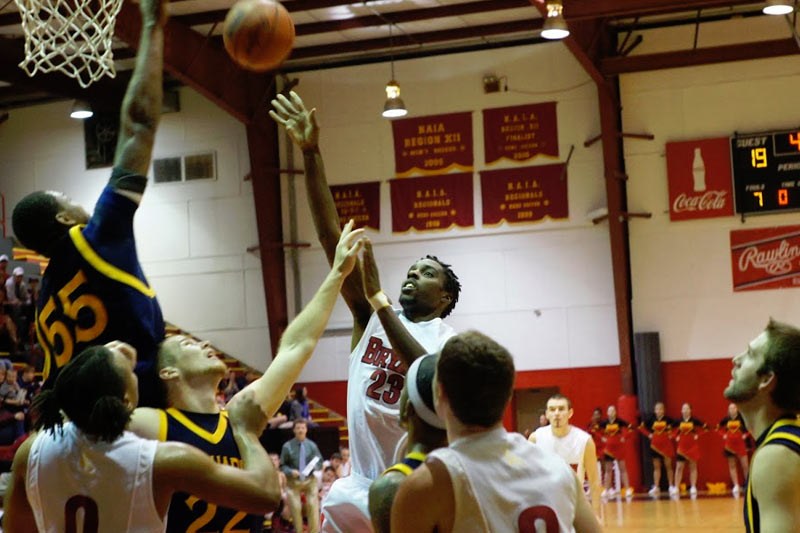 Bryan College Basketball Men’s Team hosted Reinhardt at Summers Gymnasium on Saturday afternoon.  Bryan College came into the game with a 12-10 overall record and 7-4 in conference.  Reinhardt came in with an 11-10 and 7-3 conference record.  Bryan played Reinhardt back on early December and lost 82-81 in a fiercely contested game which Reinhardt won on a last second free throw by Matt Porter.  A big stat for that game was 16-39 three point baskets.

To this point probably our biggest win of the year. I am pleased with the 10 out of 12 wins but we still feel we have plenty of room for improvement.

Caleb Tuck and Brandon Cole got Bryan off to a good start with three point baskets as Bryan took a 12-4 lead with 14:48 left in first half but Reinhardt rallied to cut the deficit to 13-12.  Over the next few minutes Bryan went on a 27-4 run to take a 30-16 lead with 6 minutes left in the half.  When Logan Sharp made a three pointer at the 2:45 mark, Bryan enjoyed a 43-21 lead.  Reinhardt cut into the lead a little over the last 2 minutes to cut the score to 45-27 at the half.

Over the next 10 minutes the teams exchanged leads and there were six ties along the way and neither team led by more than three points.  Reinhardt made a basket with 2:20 to tie the game at 67-67.  Robert Troino gave the Lions the lead 70-67 with a basket and the free throw.  The Eagles fought back and came within one point when Reinhardt made a free throw with 52 seconds remaining and made another free throw with 12 seconds to tie the game 72-72.  After Bryan had two free throw misses it was Derrick Walker with the big rebound and putback with 4 seconds left to give Bryan a 74-72 lead that stood up till the buzzer.  Derrick Walker only had one basket but it was a big one.