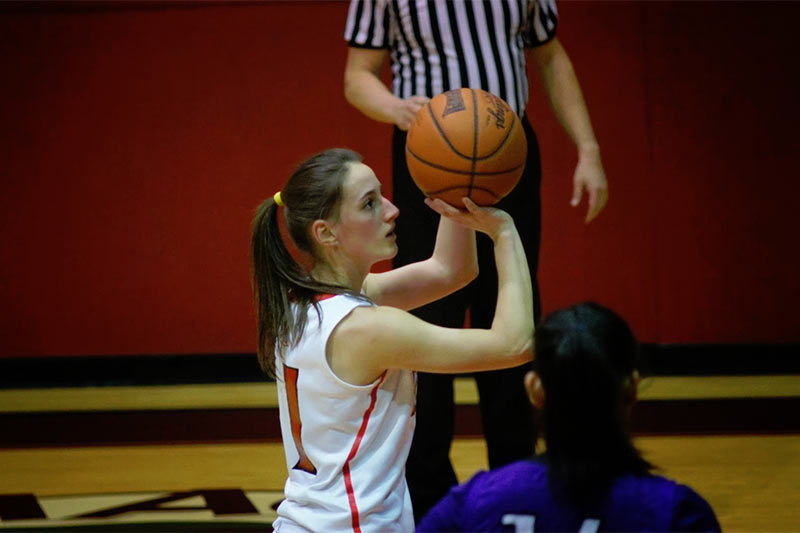 The game was close in the early going.  At the 14:56 mark in the first half the score stood at 14-14.  From this point the Koalas went on a 10-4 run to take a 24-18 lead.  Neuharth, Lane and Billingsby scored the next 7 points to give Bryan the lead with six minutes left in the half.  The score remained close through the rest of the first half with Bryan maintaining a lead that bounced between 1 to 4 points during the next six minutes.  Anna Outlaw hit a basket just before the halftime buzzer to cut the Bryan lead to 37-35 at halftime.  The first half was a evenly contested half with the average lead no more than 4 points.  Bryan did outrebound Columbia 30-17 in the first half.

In the early going of the second half Bryan continued to maintain a small lead through the first 9 minutes with no more than a five point lead during this time.  Jenna Ray hit a basket with 10:56 to give Bryan a six point lead and when Kelsey Brooks made a basket off a Columbia turnover the lead was up to 53-44.  Jenna Ray then went to work with six of the next eight points for Bryan as they maintain a 6-8 point lead.

Taylor Smith from Columbia made a basket to cut the Bryan lead to 66-60 with 4:26 left in the game.  Formont and Billingsby score the next six points of the game to take the lead to 12 for Bryan with 3:25 left in the game.  Columbia was never able to cut the lead to less than eight the rest of the way to an 81-70 victory.   Bryan had secured another win and stayed in competition for the Conference title.  Bryan now has an 11-4 conference mark and trails conference leader Tennessee Wesleyan and Union who are 13-2 and 12-4 respectively.  Bryan will play each of these teams on the road in Mid-February.  Bryan next plays on the road at Milligan on Saturday at 2:00 PM.

For the game Field goal percentage was even at 38.9 vs 39.2 % in favor of Columbia but Bryan made 22 of their 35 free throws while Columbia made 6 of 12 free tosses.    Bryan was huge on the boards with 58 rebounds versus 44 for Columbia.  Megan Billingsby had 20 of those 58.  Megan had 20 points to go with the rebounds and Jenna Ray chipped in 18 points.  Keila Formont had 13 points and 5 assists and Taylor Neuharth had 11 points for Bryan.