You don’t have to be in the boat very long with Jacob Foutz to realize that the words “give up” don’t exist in the young man’s vocabulary. The sun was sinking low and the temperature was falling fast on this cold February afternoon on Chickamauga Lake. Every area bass angler knows that the bass bite has been tough lately, real tough.

Foutz, however, never seemed to waver – sending one cast after another steadfastly across the calm water. He might swap a rod or swap a lure on occasion, maybe move to new water, but he always stayed focused on the hunt without uttering a pessimistic word. Only when the sun dropped out of sight and numb fingers inspired me to cry, “Uncle,” did Foutz consider pointing his Nitro Z20 back towards the launching ramp.

“You can’t let that stuff affect your fishing confidence at all,” said Foutz. “You’ve just got to stick with it and keep going and you’ll eventually run into some.”

That kind of perseverance and confidence is what likely led Foutz to the biggest bass tournament of his still-budding career. In just four weeks the Bryan College sophomore will face off against the biggest names in bass fishing in the 2018 Bassmaster Classic on South Carolina’s Lake Hartwell. Names like Edwin Evers, Mike Iaconelli, Randy Howell, Skeet Reese, Gerald Swindle and many others. But Foutz is in awe of one name in particular.

“How can you not say Kevin VanDam,” he said. “He’s accomplished all you can in the sport and continues to dominate year-after-year. To be able to say I’m going to get to fish against him… and hopefully I can beat him in the standings… that’s incredible to me and an opportunity I can’t wait to experience.”

HOW DID HE GET HERE?

Foutz earned his way to what is called “The Super Bowl of Bass Fishing” by winning the 2017 Carhartt Bassmaster College Series National Championship. He will be one of only 51 competitors. At 19 years old he will be, without question, the youngest angler in the field.

“There will be lots of eyes on me for sure,” said Foutz, seemingly unfazed. “For whatever reason I’ve always performed best when the pressure is at its highest.”

The first Bassmaster Classic was held in 1968, about 31 years before Jacob Foutz was even born. The youngster doesn’t think he will be the youngest angler to ever compete in a Classic, but if not, he’s close. And a win would definitely secure a place in history, wrestling that honor away from Stanley Mitchell who won the 1981 Bassmaster Classic at the age of 21.

“It’s still something I have a hard time believing,” said Foutz. “It’s incredible.”

The youngster will be fishing in a brand new Nitro Z20 pulled by a Toyota Tundra, both provided as a result of his college national championship win. He said he just picked up his new outfit two weeks ago. The boat is pushed by a 225 Mercury Pro XS equipped with Power-Pole shallow-water anchors, Humminbird electronics and a Minn Kota trolling motor. Carhartt awarded him with $7,500 in prize money to help with travel as he also gained entry into not only the 2018 Classic, but also all nine Bass Pro Shops Bassmaster Opens in 2018.

He competed in the first of those Open events on Florida’s Kissimmee Chain of Lakes the first week of February. At 41st place (out of 207 anglers), Foutz just missed taking home a paycheck by one spot, but he did manage to edge out one of his bass fishing mentors, Michael Neal (42nd), by one ounce.

NO REST FOR THE WEARY

However, Foutz isn’t slowing down between now and the Classic. He just finished an FLW college tour event in Florida where he placed 14th (out of 188 teams) with his partner, Jake Lee. March 1 he heads for another BASS Open event in Mississippi.

“I’m going to be able to keep the rust knocked off and hopefully stay at the top of my game going into the Classic,” he said.

“It’s been rough but thankfully Bryan College has got a lot of great professors that work with me and help me along the way,” said Foutz.

Of course school officials aren’t disappointed by the significant the recognition Foutz and all his fishing teammates have brought to the small Christian college in Dayton (Tenn.).

Taylor Hasty, Bryan College Athletics Director, said, “[The fishing team] has kind of put us on the map regionally and put our name out there in a really positive light. For Bryan to have success like this, especially in a community like Dayton where fishing is a big deal, this is a wonderful thing for our school and our fishermen. It’s been a fun ride for sure.” 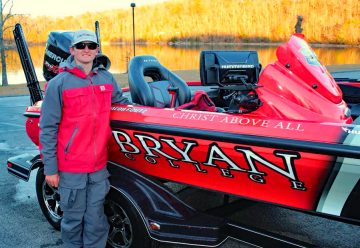 Foutz, like every Bryan College bass team member, has the same prominent words inscribed on his boat – “Christ Above All.” He says those words mean a lot, off the water and on the water.

Whether Foutz beats Kevin VanDam or not, or whether he brings home a big paycheck or not, it is quite clear that this young man will leave Lake Hartwell as a winner.