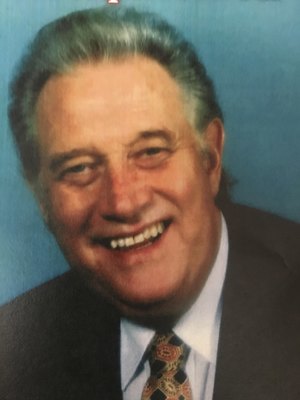 Benny Daniels 81 Of Valdosta met his healing Jesus Thursday, November 2, 2017 at his residence after a brief battle with cancer. He was born on September 26, 1936 in Dayton, TN to the late Pete & Estelle (Brooks) Daniel. He was a member of Azalea City Church of God. Affectionately known as Brother Benny, he has proclaimed the gospel of Jesus Christ through music, preaching and radio broadcasting over South Georgia and North Florida. In 1981 he began his radio program Sunday Morning Coming Down and continued it for over 36 years. During this program he would always have a prayer and praise list which he would pray for all those on the list then sing his signature song What a healing Jesus. Along with his parents he was preceded in death by his brother, Eddie Daniel.
Survivors Include: Wife of 40 years, Carolyn Daniels, Valdosta, GA; 2 Sons & Daughter-in-law: Tony and Melinda Miller, Valdosta, GA, Tim Miller , Chattanooga, TN; Daughter & Son-in-law: Valerie & Donnie Shelton, Adelanto, CA; 3 Grandchildren: Janey Miller and Jon Jon Miller; and a Grandson and 1 Great Grandson from Colorado; Sister-in-law: Ginger Daniel, Soddy Daisy, TN; 2 special nephews: Jeff Daniel & Brian Daniel and niece, Dee Dee Williams.
A celebrations of his life and homegoing service will be held at 5:00 P.M. Sunday, November 5, 2017 at Azalea City Church of God. A private burial will be held on Monday. He will be placed in the church 1 hour prior to the service. The family will receive friends from 6:00 to 8:00 PM Saturday, November 4, 2017 at Music Funeral Services, Valdosta. This celebration will include family and friends telling stories of his life and an old timey gospel sing. That deep raspy voice will be missed and in the words of Brother Benny Give your life to Jesus, he can do more with it than you can. Sympathy may be expressed online at www.musicfuneralservices.com. Brother Bennys family is being cared for by the professional and caring staff of Music Funeral Services, Valdosta.