Tennessee Wildlife Federation’s Hunters for the Hungry program is open for the season. Participating deer processors throughout the state are now accepting donations of whole deer to feed local families in need, including several processors near Rhea County, including R&D Custom Meat Processing in Dunlap, Blankenship Farms Meat Processing in Calhoun, Watts Bar Wildlife Artistry in Decatur or Don’s Meat Shop and Middle Valley Deer Processing in the Hixson area. All are participating in the TWF Hunters for the Hungry program.

When hunters harvest a deer they can donate it to Hunters for the Hungry at a participating processor. The venison is processed for free or at a reduced rate and then provided to area food banks or soup kitchens. One deer provides as many as 168 meals of venison. This year, more than 80 deer processors in 66 counties are accepting deer donations.

“For the first time ever, we have full funding in Tennessee. Every participating processor has funds to accept 10 or more donated deer at no cost to the hunter,” said Matt Simcox, TWF Hunters for the Hungry manager. “We were able to expand the program this year thanks to the hard work of high schoolers across the state who raised money as part of the Hunger Challenge.” 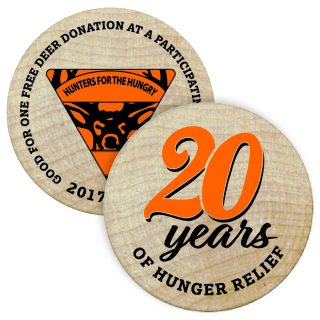 Donations above the funded allotment are also accepted. Hunters may redeem Deer Coins purchased from Tennessee Wildlife Federation or pay a reduced, $50 processing fee directly to the processor to cover processing costs.

Both 2015 and 2016 were record seasons for Hunters for the Hungry. Tennessee Wildlife Federation is hoping to continue the trend making the 2017 season the most impactful yet and providing more meals to those in need.

“Hunters for the Hungry is in its 20th year in Tennessee and has provided nearly 6 million meals in that time,” Simcox said. “The program also connects hunters to their communities, allows them more opportunities to hunt, and helps better control our state’s deer population.”

Contact information and additional processors in neighboring counties may be found by visiting tnwf.org/processors.