For the third time of her collegiate career, Giles picked up All-AAC honors. After earning the Freshman of the Year title in her debut season and landing on the All-Conference 1st Team, she followed it with an All-Conference 2nd Team award last year.

The Athens, Tennessee native battled her way to the 1st Team this season as Bryan’s leading scorer with 11 goals. She’s played in all 19 matches for the Lions, scored a game-winning goal on five separate occasions, and has dished out a pair of assists. Her total goals rank 4th-highest in the AAC, and her .58 goals per game average rank 5th. Only one other player in the conference has scored more game-winners than Giles. She currently ranks 23rd in the NAIA in total game-winning goals and 33rd in game-winning goals per game.

Giles was Bryan’s only player to be recognized as an AAC Offensive Player of the Week this year, marking the second time of her career that she’s won the award. She garnered the weekly accolade after delivering a hat trick in the team’s 3-1 victory over Southern States Athletic Conference foe Dalton State College (Ga.) at the beginning of September.

In the two seasons suiting up for the Lions, Robe truly took on a leadership role this year, serving as the anchor to Bryan’s back line and a captain to the team. The defender from Athens, Ohio started in every match this year, seeing the Lions to five total shutouts and all of those coming in conference play, which was 5th best amongst all AAC schools. Bryan’s defense held conference opponents to only 1.08 goals per game, also ranking them in the top-5.

Bryan finished the regular-season 9-9 overall and 8-5 in the AAC, good enough for a 5th-place finish in the conference and a No. 5 seed where they eventually saw their season come to a close in the quarterfinals at the hand of No. 4 seed Milligan College (Tenn.). The Lions ended the year with an overall record of 9-10.

In total, eight Lions were recognized for their efforts in the classroom, earning a spot on the All-Academic Team. Bryan tied Montreat College (N.C.) and Union College (Ky.) for the 5th-most All-Academic members, trailing Columbia International University’s (S.C.) 9, Reinhardt’s 10, both Tennessee Wesleyan’s and Milligan’s 14 apiece, and Truett McConnell with the most at 18. These awards are presented to all student-athletes who excel in the classroom. Nominees must be an active member and student-athlete of the varsity team, be a sophomore or upperclassman, and attain a grade point average of 3.25 or higher. 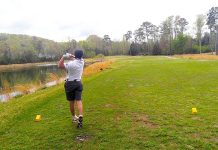