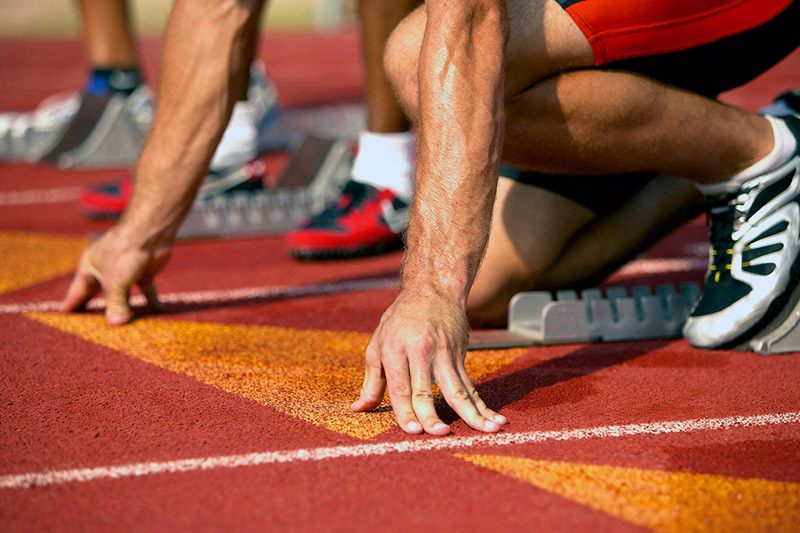 From the Sidelines: A Story of True Grit

There are a lot of heartwarming stories that can be told about the overcomers in the field of athletics. The overcomers are the ones that come out of obscurity and make naysayers in life take notice.

Of these over comers, the ones who make an impression on me are the athletes who have overcome physical handicaps and still have been able to participate on teams.

The story I would like to share today, is the story of Mark Mann.  Mark Mann was a student in a school where I was teaching in Macon, Georgia.  Mark was legally blind and came to school every day with a big magnifying machine that he would use to read his text books.  He could not distinguish between objects or people until they were right in front of him.  When he was in high school he wanted to play football and run track.  As coaches, we all wondered how he could manage but we were all in his corner to see if we could make it work.

When Mark suited up for football games he could usually count on playing at some point during the 4th quarter.  When the coach would put Mark in, he would always substitute someone else in at the same time.  Not being able to see at any great distance, Mark would always grab the jersey of his teammate as they ran out to the field together. This helped so Mark wouldn’t run into the wrong huddle.  He would get down in a 4 point stance on the defensive line and would follow the coach’s directions to a tee.  He would simply tackle anyone who had a different color jersey than his.  I admired his grit and perseverance.  He was admired by teammates and parents alike.  Every now and then the player he helped tackle had the ball and people would stand to their feet to encourage him on.

I thought it was a great display of character and really admired him.  That was until he told me he wanted to come out for my track team.  I couldn’t imagine what event he would even want to try!  He told me he wanted to throw the shot and discus, and also run the 400.  For the next couple of years we pointed Mark in the right direction and did our best to allow him to participate.  He participated in most meets and gained statewide respect from his peers for being willing to compete.  In the 400, he could not see the lines on the track, but could see the contrast between the track and the grass if he could run in the inside or outside lanes.  He worked hard, but his times were never good enough to ever place in a meet.  We always had him compete against his own times and tried to encourage him to beat personal bests in every meet he ran.  For Mark, the encouragement everyone gave him and the accomplishment of modest goals kept him enthused and involved.  We were meeting a need in his life as we encouraged his participation.

The thing I will always remember about Mark Mann took place in the spring of 1992 when he took part in his last track meet of his senior year in Athens, Georgia.  It was a big invitational meet and I knew that Mark would not have any opportunity at all to place.  However, we let him throw the shot and discus as our number 2 thrower that day.  Mark enjoyed his final entry in his 2 field events and was satisfied that he had done his best, even though he was far from placing.  In the 400 we entered Mark, even though we knew his best time was 10-15 seconds slower than the best times.   There were 3 heats of the 440 and I felt we could get Mark into the outside lane of the slowest heat.  I talked to the coaches and reminded them of Mark’s handicap.  He could only run if they would allow him the outside lane so he could see the edge of the asphalt in contrast to the grass.  They allowed a lane change and assigned him the only lane in which he could run.  I reminded Mark that this was the last race of his career and then of his personal best time he was trying to beat.  Mark was ready for the race.  It would be a race I’ll remember for the rest of my life.

As the gun sounded, Mark shot out of the blocks.  As he rounded the first curve, he was looking good and running well.  As they came to the straightaway, I turned my attention to the front runners in the race.  I had been asked to get a 2nd clock on the #2 finisher and my attention followed him to the finish line.  I quickly gave his time to the recorder and turned my focus back to Mark.  He was coming down the back stretch, his usual 10-15 seconds behind the leaders.   As he crossed the finish line, I clocked his time as beating his personal best by 1 second.  I was excited and told Mark his time as he fell on the infield grass in exhaustion.  There would be no ribbons, no awards, and no recognition.  There would only be the self-satisfaction that this blind athlete had accomplished his personal best.

While walking away, a coach came to me and asked me how Mark was doing.  He seemed quite concerned that I would nonchalantly say that I thought he was OK, but maybe only a little bit tired.  He then told me what he had witnessed as Mark was running down the back stretch.  As he came out of the first curve and accelerated down the back straightaway Mark weaved off of the track and ran full speed into the edge of the front row of the football bleachers.  Hitting them at knee height he rolled over the bleachers and landed back on the track.  Other observers, who couldn’t believe what they had seen, said Mark picked himself up and gallantly finished the race.  Mark left the track with no serious injuries, but had gained the respect of countless individuals.  This young, blind, athlete had not let running into a bleacher stop him from setting a personal best.

I learned a lot from coaching Mark Mann, a legally blind athlete. I learned that a person is only as handicapped as they think they are.  I learned that participation in athletics can teach just as much, or more, than the victories.  And I learned on that day that it takes a lot to stop a person with character and grit.  The old athletic saying, “When the going gets tough, the tough get going” came to life for me on that day and I frequently think about his remarkable effort in that particular track meet.  Over the years, I have retold the story numerous times in the hope of encouraging other athletes to finish the race that is set before them.