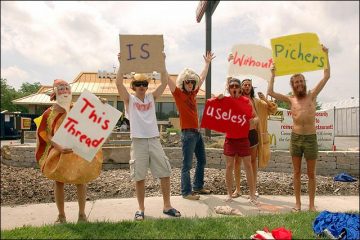 Make note of the photo to the right you may have seen on the Internet. I know this [story] is useless without pictures.

I can offer no physical proof of the truth of this tale. And we all know that, “Not all liars are fishermen, but all  fishermen are liars.”

But this is truth. I only pray I can come close to describing what transpired.

I was bluegill fishing on Chickamauga Lake. More specifically I was in Wolftever Creek not far from Rabbit Island (maybe details will add some to my credibility?).

A few days ago I was using an ultalight rod to cast a 1/32nd ounce jig head tipped with a wax worm. It was around 11 am on a section of shoreline that has historically held bluegill beds. The water was clear and shallow… maybe 2-3 feet deep where I cast my wax worm.

Instantly a hefty bluegill 8-9 inches long smacked the wax worm. I set the hook and the big bluegill made two quick hard circles in the clear water.

Instantly I saw a surge of water from the right and in the clear water a largemouth bass of incredible proportions appeared. It’s huge, gaping mouth opened wide as it slashed at the bluegill once, twice and then a third time.

In the bluegill’s desperate attempt to escape the gaping mouth it had rushed to the surface so every time the huge bass slashed, its back was out of the water. Less than 20 feet away I got a very good look. It cavernous maw looked large enough to swallow a rabbit. In 2017 I managed to catch a 12-and-a-half pound bass from Chickamauga (pictured right). This fish rivaled the size of that one.

On the third pass the bass inhaled my thrashing bluegill and headed for deep water. Remember my tiny hook was already embedded in the bluegill’s mouth but as I reared back on my ultralight rod the reel’s drag began to sing.

“Oh my [gosh], I’ve actually hooked this fish,” I thought.

The drag continued to sing and I hit my trolling motor to swing the boat and start following the bass. But the reel’s drag kept singing and I remember thinking, “This fight is going to last a while.”

It felt like an eternity but in perhaps 15 or 20 seconds the mad dash ended. It was clear I did not actually have the bass hooked. The huge fish had simply clamped down on the big bluegill but finally grew tired of our game of “tug of war,” opening its mouth and releasing what could have been its next meal.

My heart dropped, although I wasn’t surprised.

What happened next was a huge surprise.

The bluegill, probably now 50 feet from the boat ran to the surface. Although the water was probably ten feet deep, the fish swam furiously, literally with its back out of the water. I told a friend later, “If that bluegill had been near shore I truly believe it would have climbed out on the bank.”

The huge bass crashed the surface again, clearly still incredibly mad that his (or her) meal was escaping. Another surge of adrenaline hit my heart.

Over and over the huge bass smashed and slashed at the bluegill. At least twice I saw the bluegill get knocked 2 or 3 feet in the air. I’m watching Mother Nature at her finest – or at her worst if you’re the bait fish that is the target of this attack. And it is happening at the end of my fishing line.

After five or six vicious passes without inhaling the bluegill again, the huge bass disappeared. The water’s surface grew glassy and calm. I still had the bluegill on the line but it floated lifelessly.

It would have been easy pickings for the big bass now. But he (or she) never returned. Now I wondered, or suspected, the huge bass wasn’t necessarily hungry. It was simply excited by the bluegill’s frantic actions when I hooked it, sending the bass into a fevered “search & destroy” frame of mind. Once it had killed the object of its rage it was satisfied and eased back into the depths.

I will never know. All I know is that for a minute-and-a-half I was immersed in a Discovery Channel wildlife experience. I was desperate to share what I had just seen and went to text a friend. However my fingers trembled so badly I had a hard time hitting the right letters on the keyboard.

At my age, I’m not sure how many more of these kinds of experiences I can take.

But, I know. This story is useless without pictures.