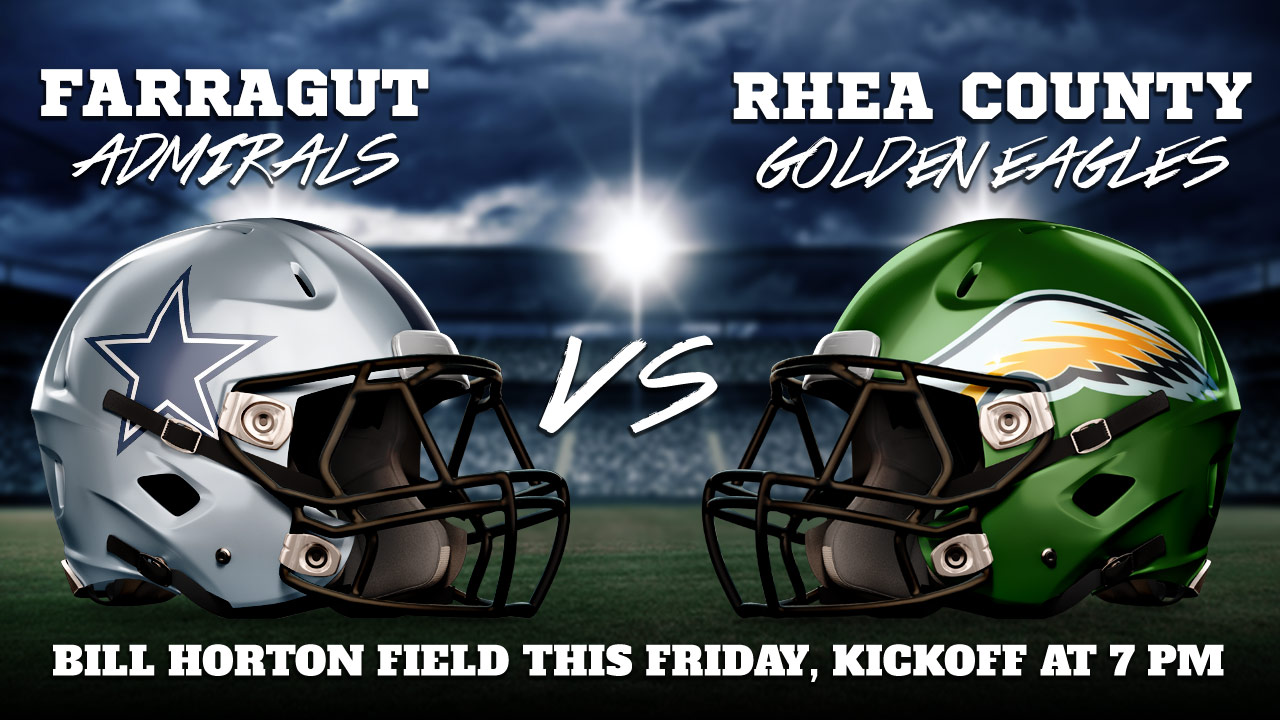 After weeks upon weeks of Tennesseans begging for some fall weather, the cool breezes, color changes, and the early darkness have finally arrived, bringing dreams of Thanksgiving turkey and dressing and the not so distant lights of Christmastime. Those holidays have yet to make their way to Rhea County, but one thing the residents of this county have been longing for is already one game in: the Tennessee Class 5A playoffs.

Following weeks of making trips to such locales as Clinton, Sparta, Cleveland, and Chattanooga, the hometown Golden Eagles of Rhea County High School are playing for their second straight playoff game at home. Last week, the Golden Eagle faithful watched as their boys of fall shellacked the visiting Panthers of Lenoir City High School 45-7 after a bit of a scare as the Panthers drew first blood within the first minute of the contest after a costly Eagle turnover. However, by the time the clock struck 0:00 in the fourth quarter, it was all Rhea County.

For the fourth straight year of his four year tenure in Evensville, Mark Pemberton has led his team to the second round of the playoffs. Under Coach Pemberton, the Eagles have not finished a season with fewer than ten wins, and they will be looking to keep that streak going as they look for that tenth win against the visiting Admirals of Farragut High School from Knox County.

The Admirals are coming off of an impressive 40-21 victory over McMinn County, a member of Rhea County’s 4-5A region, and will be looking to get some payback against the Eagles who made the trip to Farragut in 2015 and ended the Admirals playoff run by a final score of 40-34 after a comeback attempt from Farragut came up just a little short. Mason Stephenson, Rhea County’s starting fullback, had a monster game against the Admirals last season, tearing up the turf on Bill Clabo Field for less than ten yards shy of 300 rushing yards.

The Eagles and the Admirals are meeting for sixth time in each program’s history in what should be another nail-biter. The Admirals own the series 3-2.

Rhea County: Following two straight disappointing seasons in 2011 and 2012, Rhea County hired celebrated prep coach Mark Pemberton, a former Rockwood quarterback who won state titles as a player at Rockwood and a head coach at Knox Catholic, to take charge of the once proud and successful program.

Coach Pemberton made immediate improvements to the program, taking the Eagles to the second round of the Class 5A playoffs and a 10-2 in his first season in 2013. He and his team followed that up with back to back semifinal round appearances in 2014 and 2015, posting a combined record of 33-7 over the first three years of his tenure.

The Eagles are looking to maintain the state prominence that has come to be expected under Pemberton by moving to the Quarterfinals where they, if they defeat Farragut, will face the winner between Ooltewah and Walker Valley, both members of Region 4-5A.

Farragut: The Admirals have not seen much playoff success since the 1990s, and last season’s 2nd round appearance was the best season the Admirals had since reaching the semifinal round in 1995.

The Admirals entered the contest with the Eagles last season as the favorites to advance, but fell at home in the previously mentioned 40-34 Eagle win. They will be looking to write a new chapter of Farragut football history and once again advance deeper into the playoffs to face the winner of the Ooltewah-Walker Valley rematch and hopefully make the semifinals once more.

The Admirals have faced tough challenges all season long. Also on the line is Upper East Tennessee’s stake in the playoffs. If the Admirals and Morristown West (Region 1-5A) lose, two of the three 5A regions in the Knoxville area will have been eliminated from the playoffs before the quarterfinals.

The Game:
The rematch of last season’s second round of the playoffs will happen in Rhea County this postseason. Most people would attest that home-field advantage is important in the playoffs because they are familiar with the field, they do not have to endure a bus ride after school, and they get to play in front of their home crowd.

Simply saying that Rhea County has a home-field advantage, however, would be a gross understatement. There is just something about the Eagles when they play under the lights of Eagle Stadium while their cleats dig into the artificial turf of Bill Horton Field.

Most teams have good records at home, but few are as impressive as Rhea County’s has been under Pemberton. The Eagles are 5-2 in home playoff games, with the losses coming in 2013 in round two to Cleveland and 2014 to eventual state champion Knox West in the semifinal round.

Also a factor for Rhea County is the crowd. Eagle Stadium boasts a maximum capacity of around 8,000 to 10,000 for both the home and away sides combined with the home side maxing out for the hometown team when they need it the most.

Not only do they max out, they are some of the loudest and proudest fans in the entire state of Tennessee. Look for the crowd and Rhea County playing on their home turf to be a factor in this game.

The game itself is statistically, a fairly even matchup. Both teams enter the matchup after convincing wins over a team from the other’s region. There are a few differences, however, in the way that each plays their game.

The Admirals have a great balance between passing and running the ball and have one of the best defenses in the Knoxville area, pitching one shutout this season against Knox West and holding Karns to a field goal while scoring 71 points of their own.

Add on impressive wins over offensively explosive Campbell County (38-28) and second round participant from Region 2-5A South Doyle (63-26). Rhea County has not shut out anyone this season, but do have, arguably, the best run defense in the region, allowing an average of only 99 yards rushing per game, and only 101 in region play.
Players to Watch:
Farragut: Adam Fulton (QB #19), Cooper Hardin (RB/LB #1), Amon Johnson (RB #9), Cade Burkey (LB #31), and Drew Butler (RB/LB #42)

Score Prediction: This game could come down to the last possession given the efficiency both of these teams have displayed on offense. With the crowd and home turf thrown in on top of a top notch rushing attack and a kicker who can consistently score points from long range, I think Rhea County punches their ticket for a rematch with either the Owls of Ooltewah or the Mustangs of Walker Valley off of the toes of Logan Johnson.