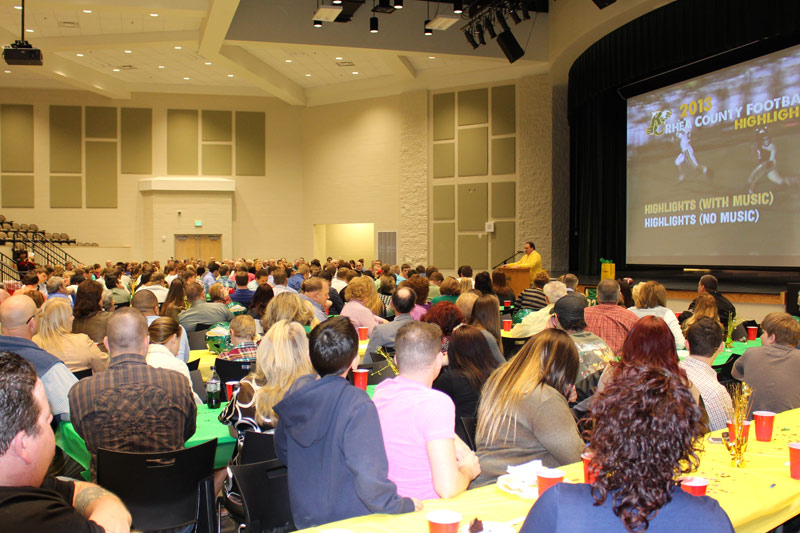 The 2013 Rhea County Football team gave us all a season to remember.

This program had the 2nd biggest turnaround in the state of Tennessee. This did not happen by happenstance. These guys worked their tails off.

The 2013 RCHS Golden Eagle football team recaptured that magical feeling of Rhea County football this past season.   Sunday was a time to honor their accomplishments at the Rhea County Touchdown Club annual football banquet.  The teams accomplishments are testament to the leadership provided by Head Coach Mark Pemberton, Athletic Director Micah Ruehling, the dedicated assistant coaches, all the way down to the senior players.

Speaking directly to the senior football players and cheerleaders, RCHS Athletic Director Micah Ruehling said, “What an outstanding career that you had. I’m so tickled that your senior year ended with a regional championship and the number one seed in the playoffs.”

Ruehling finished by saying, “I challenge you seniors as you prepare for final 3 months of high school. Enjoy the time that you worked for make sure you that you finish the race. And best of luck to you as you go on to the next endeavors of your life.”

Golden Eagle Coach Mark Pemberton proudly said, “This program had the 2nd biggest turnaround in the state of Tennessee. This did not happen by happenstance. These guys worked their tails off. We put them through the grinder, and they responded. The 10-2 season was a result of that.”

“The foundation has been laid for this program and gotten it back to where it should be. Where I always remember it, back into the playoffs, battling for a state title.  And that’s the way it needs to be from here on out”, says Coach Mark Pemberton.

We look forward seeing more of the rising stars of Rhea County football.  On March 15th, the Rhea County Football Team will be hosting the 2014 “Lift-a-thon” at the high school where the team will showcase their talent and hard work during the off-season.

If you would like to support your Rhea County Golden Eagles, I encourage you to contact Anthony Loden via facebook by clicking here – https://www.facebook.com/groups/140756959297419/. The Rhea County Touchdown club will also be hosting their 2nd Annual Football Golf Tournament in April.