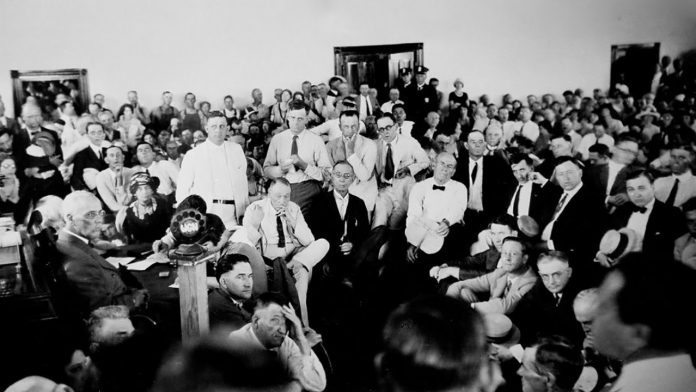 Ninety-four years ago this week (July 10-21) 1925, the world had its eyes on the small sleepy town of Dayton, Tennessee.

In March of 1925, the newly passed Tennessee Butler Act caught the attention of the American Civil Liberties Union in New York.  The new law prohibited the teachers in Tennessee from denying the Biblical account of mankind’s origin. The Butler act was introduced by Tennessee House of Representative John Washington Butler.

The ACLU immediately responded throughout the Tennessee newspapers with an offer to defend any teacher prosecuted under the law.

Dayton businessman, George Rappleyea, the manager of the Cumberland Coal and Iron Company in Dayton read the article and quickly realized that this was Dayton’s chance to revive their economy and put their town on the map.

A band of Dayton businessmen lead by Rappleyea, approached John Thomas Scopes about testing the newly passed law. Scopes was the local high school football coach but had temporarily filled in as a substitute biology teacher.

Scopes believed that if one followed the state approved textbook “Hunters Civic Biology” which contained a chapter on evolution, then the teacher would be violating the law.

John Scopes was arrested and charged with violating the newly passed law, thus setting the wheels in motion for a trial that would capture the attention of the world.

While the world’s attention focused on the trial, local citizens packed the Rhea County Courthouse in sweltering hot temperatures to witness the trial of a lifetime.

One-time Secretary of State William Jennings Bryan and famed defense attorney Clarence Darrow, descended on Dayton to offer their assistance in the case. Bryan would be assisting the State in prosecution while Darrow assisted the defense in representing Scopes.

Scopes was eventually convicted by a jury comprised of all Rhea County citizens and fined $100 by Judge Raulston.

Upon appeal, the state supreme court upheld the constitutionality of the 1925 law but acquitted Scopes on the technically that the jury and not the judge should have set the fine. The law was repealed in 1967.

The trial is now in the history books and the participants in the trial have all passed away. Today some 94 years later, the trial still lives on each July when it is presented through a dramatic presentation in the original courtroom

Please feel free to leave your comments below concerning this post.