There is a laundry list of people to thank for a recent special deer hunt hunt at the Fall Creek Falls State Park. But the fact is, none of them really want it. What they want is to help veterans learn to enjoy life and heal the scars of war. Sometimes they’re physical scars, but just as often they’re emotional.

It was the first-ever Hunt for Warriors on Fall Creek Falls, hosted by the Chattanooga-area Safari Club International chapter, the Tennessee Wildlife Resources Agency and the Tenn. Division of State Parks. Officially called Tennessee Valley SCI’s Jim Hall Hunts for Warriors, the hunt was named for Park Manager Jim Hall who is undergoing treatment for liver cancer. Hall is credited with paving the way for the first-ever hunt with firearms on the state park. Archery hunts have been allowed there for years, but never firearms.

Event Chairman Bill Swan said, “Were it not for him, this event would not have been possible.”

One of the fifteen veteran participants was LJ Planer, a former Army Ranger and sniper. Planer was an avid hunter and an outdoor cameraman for a variety of hunting shows. Walking back into camp one evening Planer told Swan, “Other than seeing my family, these are the best two days I have had since returning from active duty.”

The soldiers were mostly participants in a program called HOOAH — Healing Outside Army Hospitals — a program that works with soldiers coming back from the war with physical or emotional injuries.  SCI secured the group lodge at Fall Creek Falls for three nights, meals and various gifts for each veteran. Sen.Mike Bell, an Tennessee Valley SCI Chapter member was able to get the Sportsmen’s Caucus to donate $2,000 to aid in the event. Bell’s son, Nathan, also a wounded veteran took part in the hunt.

Soldiers were also treated to a concert by a blue grass and country music artist Carrie Hassler.

It was clearly the kind of deer hunt that takes a village.

Thanks to Bill Swan for contributing the information for this special story. 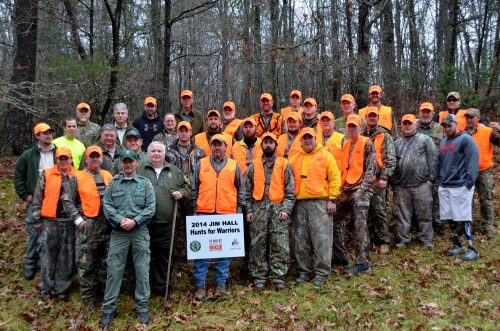